Days After Its Reimagined Debut, Guests Are Already Asking When Nighttime Spectacular Will End - Inside the Magic 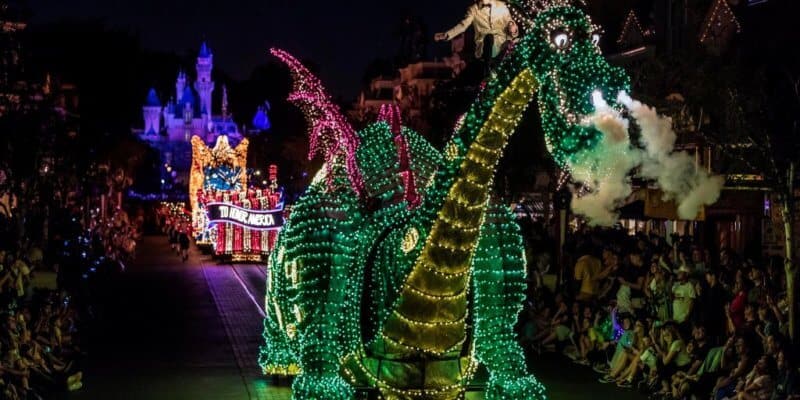 Many Guests were overjoyed with the return of a beloved classic to Disneyland Resort. After a surprise show of the Main Street Electrical Parade during a media event and live broadcast at Disneyland Park on April 20, the nighttime spectacular made its official debut on April 22.

The return of this beloved nighttime spectacular is bringing a line of exclusive merchandise and a new dining package to Disneyland Resort, as well as a collectible Light-Up Turtle Sipper and a Light-Up Elliott Dragon Popcorn Bucket, making thousands of Guests rush to the Parks to add these items to their collection.

The Main Street Electrical Parade also returned with some changes. While some were unhappy with them, most Guests were excited to see new characters joining the parade in a celebration of inclusion and togetherness and the celebration of the work of Disney Legend Mary Blair.

Shockingly, only days after the debut of this returning offering, there are many already asking when the Main Street Electrical Parade will end its presentations in Disneyland.

Redditor u/Reddit_Rip recently asked if anyone knew when the Main Street Electrical Parade is ending, as they couldn’t find any definitive date posted by Disney.

When is MSEP ending? from Disneyland

This seems to be a popular question both on Reddit and Twitter, but not because Guests want the parade gone. It is actually quite the opposite. Many Guests say they are planning to visit Disneyland Resort in the coming months but are unsure if they will still be able to see this beloved classic when they do.

At the moment, Disneyland has not released any official information regarding the parade’s performances. However, many expect it to stay for at least a year, mainly because of its 50th anniversary and the new changes made to it. Others comment on the possibility of Disney reducing performances to weekends only during some seasons but keeping the parade running for a few months more. Again, this is purely speculation from Guests, and Disneyland has not released any official information on this matter.

Do you have a trip to Disneyland coming up to see the Main Street Electrical Parade? Let us know in the comments below!