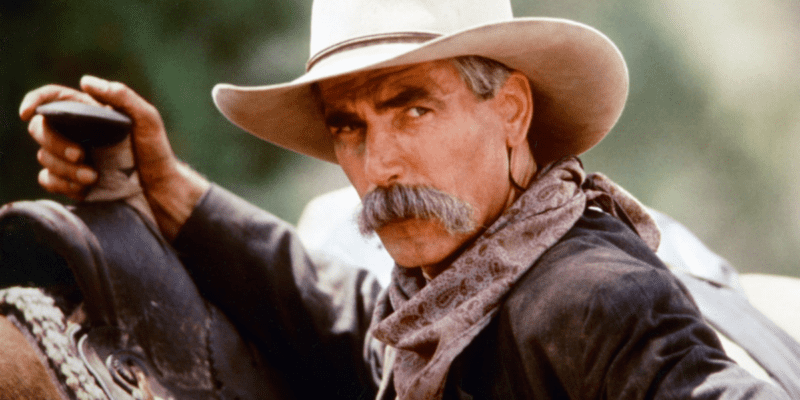 Director Jane Campion’s The Power of the Dog, featuring Marvel legends Benedict Cumberbatch and Kirstin Stewart, picked up 12 Oscar nominations (including Best Actor for Benedict Cumberbatch), but Paramount’s 1883 (a prequel to Yellowstone) Sam Elliot (Tombstone, Road House) is not a fan.

Elliot claims that The Power of the Dog was about “bowties and not much else” in a recent interview with the WTF podcast:

Marc Maron: Did you see Power of the Dog, did you see that movie?
Sam Elliott: Yeah do you wanna talk about that piece of shit?
Marc: [ohh noo] You didn’t like that one?
Sam: F*** no.

Marc Maron: Did you see Power of the Dog, did you see that movie?
Sam Elliott: Yeah do you wanna talk about that piece of shit?
Marc: [ohh noo] You didn’t like that one?
Sam: Fuck no. pic.twitter.com/BGdOd6scwe

Sam Elliot has been in countless American West films, including Tombstone (1993). He even appeared as a cowboy in the Coen Brother’s infamous The Big Lebowski (1998) film — which has nothing to do about the old west!

Elliot even earned screentime in one of the greatest, most iconic westerns of all time: Butch Cassidy and the Sundance Kid (1969).

This cowboy aficionado claimed Cumberbatch’s The Power of the Dog contended that due to production taking place in director Jane Campion’s native New Zealand left the Yellowstone actor “rubbed… The wrong way.”

“They’re all running around in chaps and no shirts. There’s all these allusions to homosexuality throughout the f****** movie.”

“What the f*** does this woman from down there know about the American West? Why the f*** did she shoot this movie in New Zealand and call it Montana? And say this is the way it was? That f****** rubbed me the wrong way… Where are we in this world today?”

The Netflix film has been praised by many for its bold cinematic choices and underlying story tones. While some call it “flat,” others call The Power of the Dog “moving,” nonetheless earning 12 Academy Award nominations, including Best Picture, Best Actor in a Leading Role, Best Supporting Actress, Best Adapted Screenplay, Best Supporting Actor, Best Cinematography, and Best Director.

Despite Sam Elliot’s opinions about the Netflix movie, The Power of the Dog is on track for numerous Oscar wins. We’ll have to see what the Academy ultimately thinks about the picture, which sports a rating of 6.9/10 on IMDb and 94% on Rotten Tomoates.

Every Marvel fan eagerly awaits the arrival of Doctor Strange in the Multiverse of Madness (2022), starring the Marvel character Doctor Strange (Benedict Cumberbatch).

From the mind of director Sam Raimi, Marvel has promised a mind-boggling Multiverse adventure this May, with countless memorable cameos of iconic characters reportedly appearing in the Marvel movie, including Tom Cruise’s Superior Iron Man, Ghost Rider, Wolverine, and even more!

What do you think about The Power of the Dog? Let us know in the comments below!