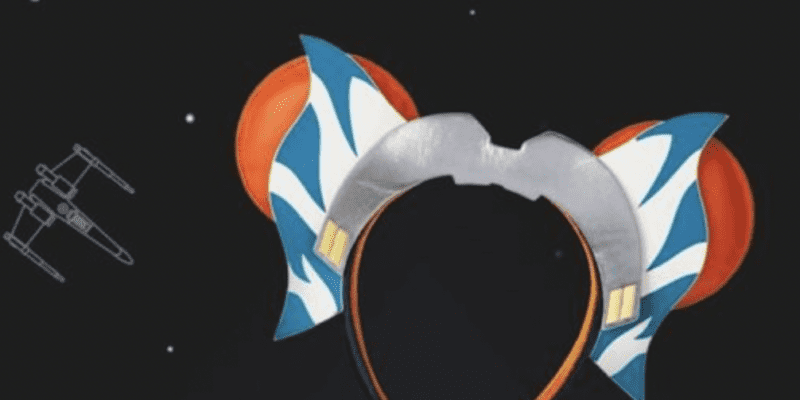 The ears, while adorable at first glance, are not necessarily the quality that Disney Parks fans are used to. The detailing on the ear headband is crafted from foam-like faux leather, not fabric, and even in these high-quality marketing materials, it is apparent that the ears are crumpled, particularly on the silver portion.

The appearance of the ears is in line with similar Guest stories about the apparent decline in the quality of various pieces of Disney Parks merchandise.

Furthermore, from getting rid of free FastPasses in favor of paid Lightning Lanes to the controversial Genie+ platform to reducing food portion sizes throughout Walt Disney World Resort and Disneyland Resort to charging $6,000 for a two-night stay on the Star Wars: Galactic Starcruiser hotel, Disney is overcharging and underperforming in many fans’ minds.

The Ahsoka ears, specifically, have garnered some negative comments from Star Wars fans online. Twitter user Mara wrote, for instance, that “The new Ahsoka ears are such a downgrade.”

It is important to note, however, that the foam-like material may straighten itself out with time and use.

The official description of the $34.99 Ahsoka Tano ear headband reads:

The defiant hero of The Clone Wars, Ahsoka Tano provides the inspiration for this ear headband designed by Star Wars actress Ashley Eckstein. With its nod to the former Jedi Padawan’s distinctive headwear, the two faux leather ears together carry the formidable warning, ”I am one with the Force and the Force is with me.”

Magic in the details

Although Eckstein was replaced by Rosario Dawson as the live-action version of Tano in Jon Favreau and Dave Filoni’s The Mandalorian saga, the character still holds a very special place in her heart.

Last year, Eckstein even shared the original description of the now-iconic Star Wars character, which was given to her before recording Clone Wars Season 1:

Through the course of the series, Ahsoka will become a [sic] more confident and powerful on her way to becoming a full fledged Jedi. Ahsoka will learn to rely on herself in connection with the force as she becomes a powerful Jedi an strong young woman. Her hero’s journey transformation will be evident in stories focusing on her personal growth through the Jedi Hero lessons.

Some of Ahsoka’s attributes were, “brave & feisty,” “patient & intuitive,” and “opinionated & talkative.” It is noted that she struggled with “insecurity,” at least initially.

At the time this was written, of course, nobody could have known just how popular the Togruta character would become and that we would still be following the story of Anakin Skywalker’s Padawan 15 years later.

What do you think about these Disney Parks ears?