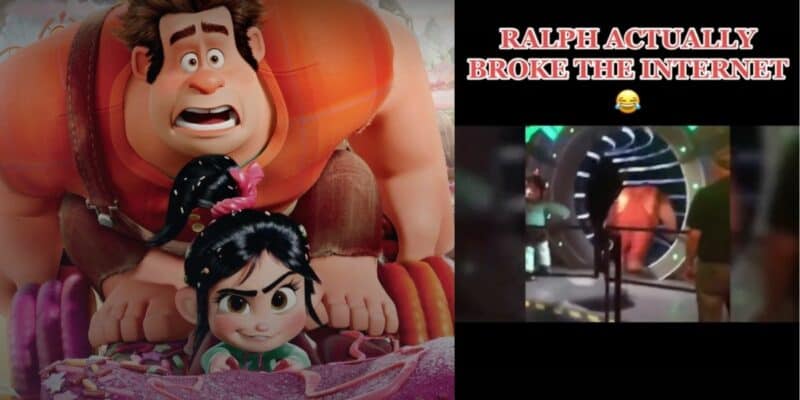 Ever wondered what Ralph wrecking things in real life might look like? The star of Disney’s Wreck-It Ralph (2012) and Ralph Breaks the Internet (2018), Ralph, and best friend Vanellope von Schweetz, were once featured as character meet and greets at EPCOT Park, with one incident leaving both of the beloved characters sprawled out on the floor.

As one of the world’s most popular vacation destinations, Orlando’s Walt Disney World Resort attracts visitors from all over the globe. While at the Disney Parks, Guests can experience nighttime spectaculars like Disney Enchantment at Magic Kingdom Park’s Cinderella Castle, interactive hotel experiences such as the upcoming Star Wars: Galactic Starcruiser at Disney’s Hollywood Studios, or daytime shows like Disney KiteTails at Disney’s Animal Kingdom. There is also the Water Park portfolio made up of Typhoon Lagoon and Blizzard Beach.

Not to mention the food, merchandise, and character meet and greets — now called “Sightings” due to the effects of the pandemic. Some “Sightings” have also now been added to Disney World’s controversial Disney Genie+ system (Genie+ and Individual Lightning Lane Selections are available at an additional cost and include quicker access to rides like Haunted Mansion)

Back in 2012, Wreck-It Ralph brought the loveable giant Ralph (John C. Reilly) and upbeat, wannabe racer, Vanellope (Sarah Silverman) into the world. Years later, Disney followed up with their 57th animated classic, Ralph Breaks the Internet, which saw the two embark on a perilous quest across the World Wide Web.

At the start of 2019, Wreck-It Ralph and Vanellope began meeting Guests at EPCOT’s Imagination pavilion following a temporary meet and greet location at Innoventions West. The Wreck-It Ralph experience saw the Imagination Institute host various “portals” to different places, with this “portal” bringing the popular characters to meet Disney World Guests. In keeping with the theme of Ralph Breaks the Internet, the experience was very theatrical with Ralph and Vanellope entering and exiting the pavilion using a tunnel reminiscent of Space Mountain.

During one meet and greet, an incident occurred that left the costumed Disney characters sprawling on the ground. The moment has resurfaced recently and has been shared on TikTok by Everythingdisney133.

Have you SEEN the Wreck-It-Ralph movies?

The video shows Wreck-It Ralph heading back through his “portal” but falling on his way in. Not knowing her comrade has been floored, an excitable Vanellope darts into the “portal”, crashing into Ralph, and is sent flying into the tunnel. A Cast Member can be heard on the video saying “Oh don’t fall Ralph!”.

Disney, as expected, aims for high standards when presenting experiences for Guests and Disney character experiences are no exception. That being said, mishaps like a floored Wreck-It Ralph do happen. From stormtroopers falling down and staying down to Minnie Mouse losing her trousers, Ralph isn’t the only Cast Member that has had issues while performing as a Disney Parks character.

EPCOT has faced a number of changes in recent years. Most notably, Future World has been split into three distinct neighborhoods — World Celebration, World Nature, and World Discovery — which will join World Showcase in making up the landscape of the Disney Park.

In terms of rides, the Walt Disney World 50th anniversary celebrations saw the debut of Remy’s Ratatouille Adventure at the France pavilion, while this year will see the Guardians of the Galaxy: Cosmic Rewind attraction finally open in the new Wonders of Xandar pavilion in World Discovery. Cosmic Rewind will replace the Universe of Energy pavilion location, and judging by its mammoth show building, looks to change the EPCOT skyline forever.

As part of The World’s Most Magical Celebration, the Disney Resort is currently presenting the fireworks spectacular Harmonious at World Showcase.

Have you ever witnessed a Disney character mishap? Let us know in the comments down below!

Comments Off on Disney’s Wreck-It Ralph Falls Over During Meet and Greet, Sends Vanellope Flying