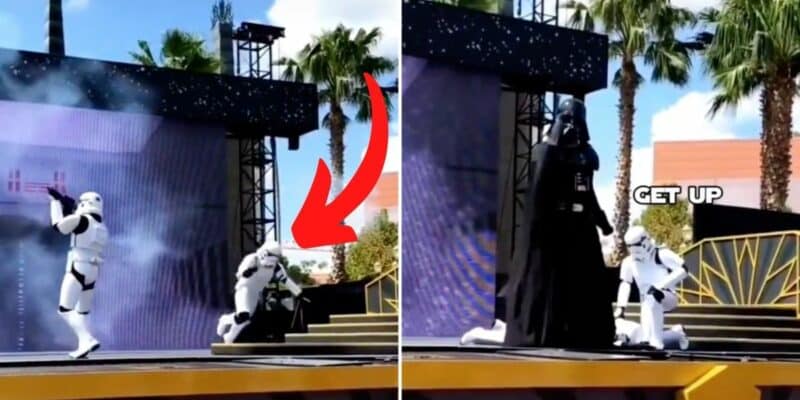 Stormtroopers aren’t the most reliable soldiers in the galaxy. Not only can they hardly hit a target and their armor seems, well, useless (?), it seems the stormtroopers at Walt Disney World, Florida can’t even walk on stage without falling down.

This is all in jest, of course, Cast Members work incredibly hard to bring fan-favorite franchises like Star Wars, Marvel, and all the Disney characters to the Parks, entertaining families and children on a day-to-day basis.

Now, renamed “Sightings”, character meet and greets are a staple part of any Disney vacation. Whether it’s Mickey Mouse at Town Square Theater or the Disney Princesses, Tiana and Cinderella, at Princess Fairytale Hall in Magic Kingdom, experiences can be found all over the Disney Resort including Disney’s Hollywood Studios, EPCOT, and Disney’s Animal Kingdom.

One of the later additions to Walt Disney World in Orlando, Central Florida was Star Wars: Galaxy’s Edge in 2019. Bringing the sequel trilogy to Disney Parks, Batuu AKA Galaxy’s Edge saw Rey, Chewbacca, and BB-8 evade stormtroopers and greet Guests in a new immersive feat of Disney Imagineering, enough to rival Pandora — The World of Avatar at Animal Kingdom.

Prior to Star Wars: Galaxy’s Edge entering the Disney theme park, and up to February 2020, a small stage show called Star Wars: A Galaxy Far, Far Away took place at Disney’s Hollywood Studios. If you want to watch the full show, you can below!

The above video shows what should happen during the stage performance at the Disney Park. It sees original trilogy villain, Darth Vader — brought to life by Dave Prowse and James Earl Jones in George Lucas’ movies — and stormtroopers appear on stage amid visual and sound effects at the Walt Disney World Resort.

However, a video of this same show from 2019 has resurfaced with the TikTok channel @waltdisneyworldparks sharing the ultimate stormtrooper fail.

In the video, one stormtrooper entering the stage immediately trips over the steps and falls to the ground, and in a rather surprising turn of events, does not get back up. Instead, the stormtrooper stays on the ground for the full Darth Vader section while the other stormtrooper seemingly tends to his injured and fallen comrade. The TikTok creator has hilariously added narration to the 2019 incident but jokes aside, we do hope the Cast Member did not injure themselves too badly!

Mishaps aren’t that uncommon at Disney Parks. Earlier this year Minnie Mouse at Disneyland Park in Disneyland Paris lost her undergarments during a rather eccentric performance with Mickey Mouse & Friends. The famous Disney character ran offstage to avoid the embarrassment!

Disney World’s 50th anniversary celebration is currently happening at the Disney Park. Home to rides like Splash Mountain and the Haunted Mansion attraction, Magic Kingdom has welcomed a new nighttime show surrounding Cinderella’s Castle called Disney Enchantment. Meanwhile, over at EPCOT, Remy’s Ratatouille Adventure opened at the Park for Guests to experience while on their Disney vacation.

Have you ever witnessed a character mishap while on a Disney vacation? Let us know in the comments below!