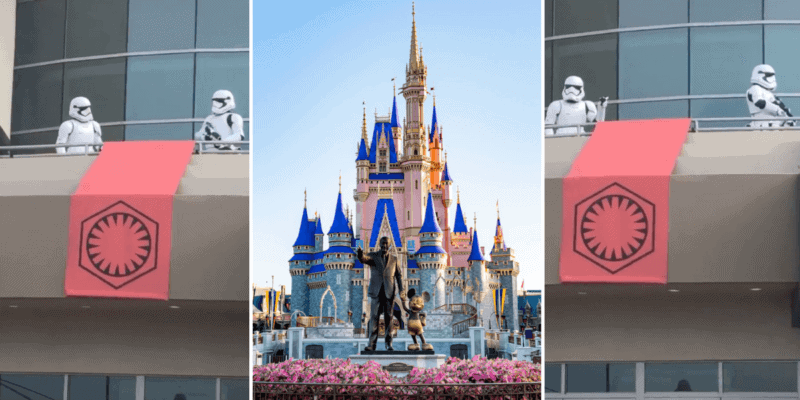 The Walt Disney World Resort is renowned for its high-quality entertainment. From character interactions to detailed Imagineering and everything else in between, a vacation to the Disney Park in Florida is a pure joy for those looking for a unique themed experience.

While character meet and greets were suspended when the Parks first reopened, it didn’t stop some of the Disney World characters from entertaining Guests around the Parks and even over at Disney Springs.

Character experiences at Walt Disney World — like this one at EPCOT — are now happening in a modified format due to measures still in place pertaining to the ongoing effects of the COVID-19 pandemic. Walt Disney World and Disneyland Resort recently loosened their physical distancing and mask-wearing policies, but due to rising infection rates face coverings are now mandatory for all Guests at indoor locations again.

A recently posted video — that seems to have been recorded shortly after Disney Springs first reopened in May 2020 and face coverings were required for all Guests ages 2 and up in all indoor and outdoor locations — shows how one Guest sparked a comical interaction with two stormtroopers at the Disney Resort. Sharing to TikTok, Nick Parker (@mindofgeek) captured the moment.

The video shows a child looking up toward the pair of stormtroopers with one of the First Order’s soldiers saying: “Hey, young one! That’s a nice face covering”. The second stormtrooper then looks at his comrade and replies with a snarky response. The stormtrooper said: “You never compliment my helmet”, before walking in the opposite direction.

The hilarious moment has now racked up almost 900k views on the social media site with many comments suggesting the stormtroopers were acting like a married couple. Recently, Gaston also caused chaos over in the Magic Kingdom after hilariously roasting a Guest who asked him out on a date. Failing comical character interactions, the animals of Disney’s Animal Kingdom can also provide fun entertainment.

Disney World’s stormtroopers were at Disney Springs when the Parks first reopened after their extended closure. The First Order was utilized to help enforce face coverings in outdoor locations.

The face-covering information has recently been updated with Disney World enforcing mask-wearing while in indoor locations while at the Orlando theme park. Per the Disney World website:

Face coverings are required for all Guests (ages 2 and up) while indoors and in Disney buses, monorail and Disney Skyliner, regardless of vaccination status. This includes upon entering and throughout all attractions. Face coverings remain optional for all Guests in outdoor common areas.

Have you ever had any funny character interactions while on your Walt Disney World vacation? Let us know in the comments!