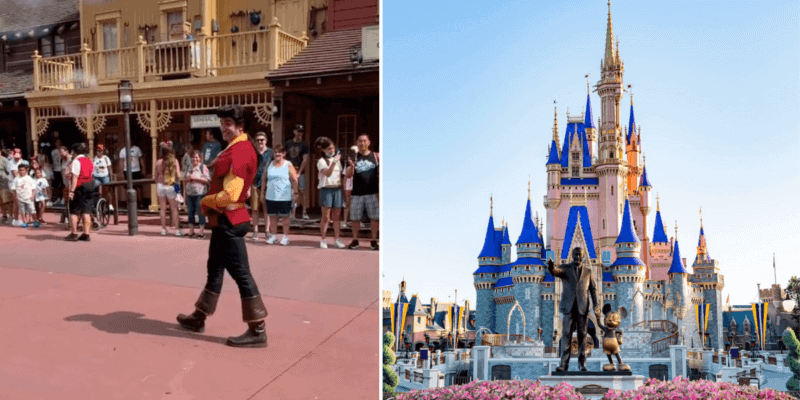 A Walt Disney World vacation is most likely at the top of any Disney fans’ bucket list. Upon entering any of Disney World’s theme parks, Guests can feel the magic right away. Whether it’s looking down Main Street, U.S.A. at Cinderella Castle in Magic Kingdom, at the Tree of Life in Disney’s Animal Kingdom, The Twilight Zone Tower of Terror at Disney’s Hollywood Studios, or Spaceship Earth in EPCOT — the sheer feat of the Orlando-based theme park is one to behold.

But, despite its magical facade, sometimes Guests can encounter cheeky moments with characters during meet and greet experiences, parades, and dining encounters — although most of these are currently not operating due to the pandemic. However, recently, one Guest found herself at the mercy of Beauty and the Beast bad boy, Gaston, during a hilarious moment in Magic Kingdom at the Walt Disney World Resort.

One of the best parts of a vacation to the Disney Parks throughout the globe is the immense commitment to keeping the magic alive and remaining true to the characters, Disney movies, and stories that are the foundation of the moments a Guest can experience.

That being said, not all the characters from Disney’s slate of movies are nice and charming. Well, in this latest case of hilarious antics from fan-favorite Beauty and the Beast (1991) character, Gaston, the villain proves he is still just as arrogant as ever.

Sharing to TikTok, Steph (@nots0swift) showed the moment her best friend laid her heart on the line for the passing Gaston, only to be rebuffed in a hilarious roast. Check out the Magic Kingdom encounter here!

The video of the comical encounter at the Disney Resort in Florida has gone viral, and at the time of publication has been viewed almost two million times with over 200k likes. In the video, you can see a Disney Guest calling out to Belle’s suitor, Gaston, saying — “Gaston, my boyfriend just broke up with me. Will you go out with me?” Only for the character to reply with — “Sorry, I’m…looking for the MOST beautiful woman in town.”

Gaston is, of course, referencing his unrelenting quest to make Belle fall in love with him, but this moment still proved to be hilarious with the Guest asking her friend if she had just gotten roasted. While this would have been harsh in any other circumstance, the jovial swagger of Gaston makes it an undeniably funny moment and just goes to show the lengths to which Cast Members in character roles go to remain true to their on-screen counterparts.

Guests vacationing at the Disney World Resort in Florida can usually meet Gaston at next to his Tavern in Fantasyland in the Magic Kingdom, but due to the ongoing effects of the pandemic, this meet and greet — as well as others — is currently temporarily unavailable.

If you’re looking for more Gaston content then Luke Evans will be reprising his role as the villain, along with Josh Gad’s LeFou in a new prequel series, Little Town, for Disney+.

Have you ever had any hilarious character encounters at the Parks while on your Disney vacation? Let us know in the comments!