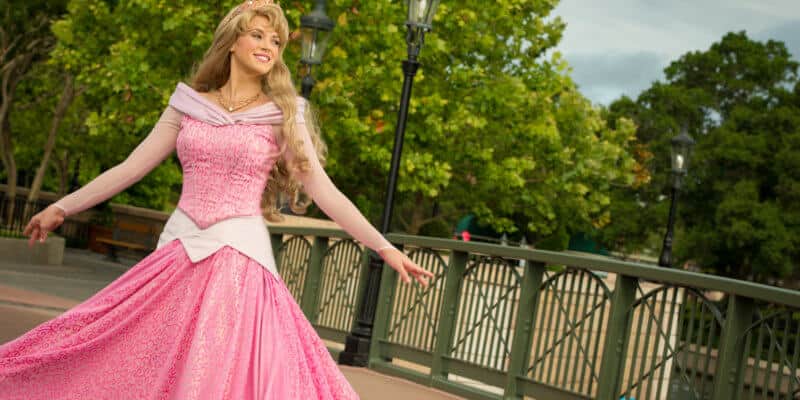 Walt Disney World is continuing to modify safety protocols and experiences offered at the theme parks as the world moves forward amidst the ongoing pandemic — including making changes to the character cavalcades that debuted when the theme parks reopened in July 2020, and the socially distanced character meet and greets opportunities.

Most recently, EPCOT has added yet another new modified character meet and greet for Guests.

Not long ago, we reported that Mulan was beginning to greet Guests at a safe social distance in the China Pavilion in the World Showcase of EPCOT as well as Princess Jasmine in the Morocco Pavilion. Now, another Disney Princess is making her return to World Showcase — Princess Aurora from the Disney animated classic, Sleeping Beauty.

One Reddit user, who goes by SantosPhillipCarlo, shared a photo to the social media platform, showing Princess Aurora waving to Guests and taking socially distanced selfies. According to the Reddit user, this is a multi-day test:

Aurora resumes greetings at French Showcase at Epcot! According to a manager, this is a multi-day test. Other Cast Members indicate this could have a domino effect.

Aurora resumes greetings at French Showcase at Epcot! According to a manager, this is a multi-day test. Other Cast Members indicate this could have a domino effect. from WaltDisneyWorld

At this point, we do not know how long Princess Aurora will be making an appearance in the France Pavilion, but Inside the Magic will continue to update you as we get information regarding this new modified character experience.

Other character appearances include Winnie the Pooh, who can be seen catching butterflies in the grass, as well as Joy from Inside Out, who tends to frolic along the same grass. And at the front of the theme park, Mickey and Minnie are posing with Guests for a socially distanced selfie.

If you want to visit Walt Disney World on your next vacation, be sure to get in touch with our friends at Academy Travel, who will be with you every step of the way when planning your magical trip.