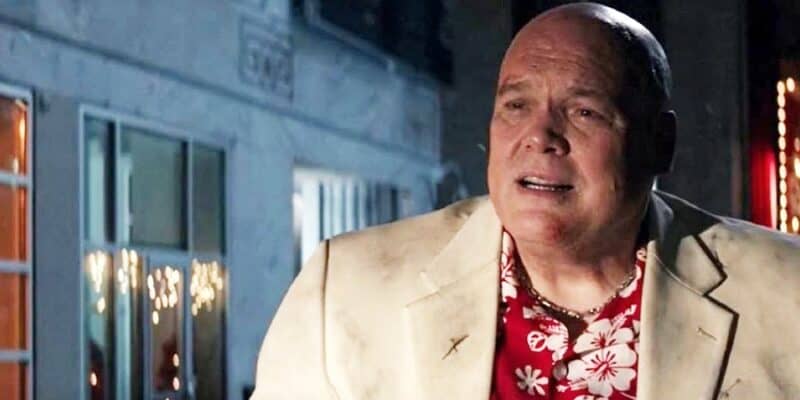 When asked if Daredevil‘s Wilson Fisk/Kingpin would be returning in Marvel Cinematic Universe projects beyond Disney+ Original series Hawkeye, actor Vincent D’Onofrio said, “No,” but didn’t stop there when it came to sharing his thoughts on what could happen.

Related: Ghost Rider Is the New Daredevil as MCU Fans Beg For Return

Over the course of one week, Marvel fans exploded with excitement as Charlie Cox’s Matt Murdock/Daredevil sat down to help Tom Holland’s Peter Parker/Spider-Man with some legal trouble in Spider-Man No Way Home (2021) as his lawyer and in the Hawkeye finale, Marvel welcomed Victor D’Onofrio’s Wilson Fisk/Kingpin into the Marvel Cinematic Universe as the main antagonist for the show.

Hawkeye spent five episodes building up to the moment where fans got to see Kingpin revealed through a photo showing the beloved villain standing next to Kate Bishop’s mother, Eleanor as the two of them were revealed to be working together. This moment led to a climactic finale where Kingpin’s strength was unleashed as he fought Hailee Steinfeld’s Kate Bishop as the young hero tried to save her mother. In the end, Kingpin faced his niece, Echo who held a gun to his face, and then the camera pans as a gunshot is heard leaving fans to wonder what could have happened.

Related: Who is Echo in Marvel’s Disney+ Hawkeye’s Series?

In an interview with The Sarah O’Connell Show, Victor D’Onofrio answers whether or not he will be appearing in any MCU project coming soon:

“No, [I’m not currently signed on for more Marvel projects.] I’ve been through this before with Daredevil. It’s very clear to them all that I really want to play this part, keep playing it. You know, I’m just hoping that continues. I’m just beginning to have fun with it.”

The actor continues by sharing what he would like to happen with Fisk:

“I still think there’s so much more to do with this character, so I’m just hoping that I do get a call. That would be really nice, and I would like to continue.”

Even if the actor isn’t signed up for an MCU show yet, there is plenty of time before Echo arrives on Disney+ as it won’t appear until 2023 leaving Kingpin to be easily cast in Echo. His fate at the end of Hawkeye leaves fans to wonder if is dead, but at the very least, Echo will most likely explore her relationship with his uncle having Victor D’Onofrio reprise his role only makes sense for those flashbacks scenes. Of course, it would be amazing if they recreate the comic book storyline where Echo shoots Kingpin and he is temporarily blinded, and fully recovers, but nothing is for certain. For all we know, the multiverse might just give us another Wilson Fisk instead.

Here’s the official synopsis for Hawkeye:

Marvel Studios’ “Hawkeye” is an original new series set in post-blip New York City where former Avenger Clint Barton aka Hawkeye (Jeremy Renner) has a seemingly simple mission: get back to his family for Christmas. But when a threat from his past shows up, Hawkeye reluctantly teams up with Kate Bishop (Hailee Steinfeld), a 22-year-old skilled archer and his biggest fan, to unravel a criminal conspiracy.

If you wish to see Kingpin in the MCU make sure to check out the finale of Hawkeye, and if that isn’t enough, you can join other fans and watch the Daredevil Netflix Show.

Do you think Victor D’Onofrio will reprise his role as Kingpin? Let us know in the comments below!