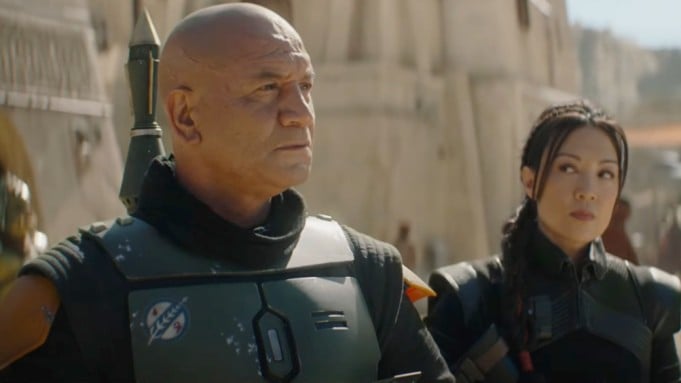 For Star Wars fans, there have been few bigger questions over the past 40 years than how Boba Fett escaped from the Sarlacc pit following the events of Star Wars: Episode VI – Return of the Jedi (1983).

When Fett (Temuera Morrison) made his triumphant return to the Star Wars story in The Mandalorian Season 2, Episode 6 (“Chapter 14: The Tragedy”), it was clear that Jango Fett’s “son” was continuing to make a mark for himself across the galaxy, but fans still didn’t learn exactly how he got out of the Great Pit of Carkoon five years earlier after losing his battle against the likes of Han Solo (Harrison Ford), Princess Leia (Carrie Fisher), and Jedi Knight Luke Skywalker (Mark Hamill).

**SPOILERS For The Book of Boba Fett Season 1, Episode 1 (“Chapter 1: Stranger in a Strange Land”) Below**

Upon finding himself in the belly of the beast — literally — Fett stole a flamethrower from a dead stormtrooper who had already succumbed to the creature’s neurotoxins. He then blasted his way out of the Sarlacc’s innards, catapulting himself onto the desert sands of Tatooine.

Patton Oswalt’s character, Garth Blundin, once delivered an epic nine-minute Star Wars monologue that foretold nearly every detail of the opening scenes of The Book of Boba Fett.

As one recent article noted about the fan-favorite Parks and Rec moment:

In particular, Oswalt suggests the following: “We pan down from the twin suns of Tatooine. We are now close on the mouth of the Sarlacc pit. After a beat, the gloved Mandalorian armor gauntlet of Boba Fett grabs on to the sand outside the Sarlacc pit, and the feared bounty hunter pulls himself from the maw of the sand beast.”

Oswalt recently took to social media to thank Star Wars fans who have been lauding him following the premiere of The Mandalorian “Season 2.5”:

Starring Morrison and Ming-Na Wen (Fennec Shand), fans are also expecting cameos from a number of other popular Star Wars characters as The Book of Boba Fett continues its seven-episode run. These include the likes of Grogu, Emilia Clarke’s Qi’ra and Crimson Dawn, Pascal’s Djarin, Timothy Olyphant’s Marshal Cobb Vanth, and, of course, a young Han Solo — CGI, of course — showrunner Rodriguez and creator Favreau have yet to confirm any details regarding special appearances by Star Wars fan-favorites.

Did you notice the connection between Parks and Rec and The Book of Boba Fett?