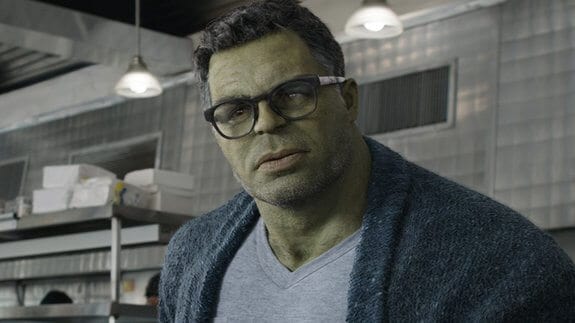 Now, with the 27th MCU movie — Tom Holland and Benedict Cumberbatch’s Spider-Man: No Way Home — releasing on December 17, 2021, the franchise has become a force to be reckoned with in popular culture.

As one recent article noted, this could portend the unveiling of a brand new MCU villain, even following the debut of Kang (Jonathan Majors) in Marvel’s Loki series:

…Kang’s entrance paves the way for a new big bad to take the throne. But what if the next major threat for the Marvel Universe isn’t Kang, Galactus, or Dr. Doom? What if the next threat comes from within the Avengers’ ranks?

In Marvel Comics, the “World War Hulk” story arc involves Hulk coming back to Earth after being banished by the Illuminati. During his banishment, he spent time on the planet Sakaar, where he became a gladiator and started an entirely new life. Marvel fans may recall aspects of this plot from Thor: Ragnarok (2017), in which Ruffalo appeared alongside Chris Hemsworth (Thor) and Tom Hiddleston (Loki).

Per numerous reports, Kevin Feige’s Marvel Studios is already in the process of setting the stage for an Illuminati project that could include popular comic characters like Namor, Fantastic Four’s Reed Richards, and Doctor Strange.

As the aforementioned article noted:

If this group tries to contain the various Hulks, there’s every chance it ends worse than it began. With all the Hulks now knowing they are targets for banishment, they might wage an all-out war on those trying to silence them.

Obviously, each character would react differently. For example, Jennifer Walters likely wouldn’t go destroy cities in search of an Illuminati member––but Red Hulk or Skaar would.

This could all pave the way for the appearance of the terrifying Maestro Hulk in the Marvel Cinematic Universe. This antagonist is described as:

While there is no confirmation that the Maestro will be coming to a live-action MCU project, all of the recent rumors could signal that Ruffalo’s beloved version The Incredible Hulk is about to undergo a major change now that the Marvel Multiverse has been broken wide open.

Following Edward Norton’s portrayal in The Incredible Hulk (2008), fan-favorite Ruffalo took over in The Avengers (2012). The official description of the Avengers’ first ensemble film reads:

Do you think Maestro Hulk will appear in the MCU soon?