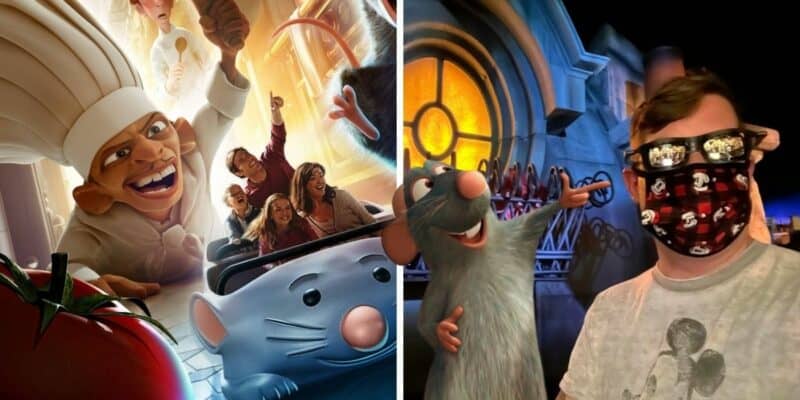 It’s the most wonderful time of the year!

And if you’re British like me, you look forward (maybe) to the awful “Dad jokes” in Christmas crackers every year. For one courageous Disney Guest at EPCOT this week, his “Dad joke” helped him skip the line at one of the theme park’s most popular attractions!

The attraction opened at Disneyland Paris’s Walt Disney Studios Park in France in March 2013 before scurrying over to Walt Disney World’s France Pavilion at EPCOT this year. Guests are shrunk down to the size of a rat and ride around Gusteau’s restaurant in a “ratmobile’.

Remy’s Ratatouille Adventure requires all Disney Guests to join a virtual queue and get a boarding group, which was, until recently, also required to ride Star Wars: Rise of the Resistance in Galaxy’s Edge.

The virtual queue for Ratatouille Adventure opens twice per day on the My Disney Experience app — once at 7 a.m. and again at 1 p.m. Guests wanting to try to reserve a boarding group at 7 a.m. need to have a valid theme park reservation to EPCOT for that day, but they can make the reservation from anywhere. Reservations open again at 1 p.m., but Guests must be in EPCOT to obtain a reservation.

Of course, the virtual queue is limited and subject to availability, with a standby queue not available. Each Guest can enter the virtual queue no more than once per day, and so many Guests, unfortunately, miss out on getting to adventure with Remy.

One Disney Guest, however, tried his luck on his birthday to experience the attraction, using his humor to charm a Cast Member into letting him onto the ride.

Just went up to the Ratatouille line and said to the cast members “Listen I’m here solo for my birthday, I’ve been gathering the courage to come try this, but i’ll trade you a holiday joke for a ratatouille ride” and they said “okay try me” …

You know Dasher, Dancer, Prancer, Vixon, Comet, Cupid, Doner, Blitzen and Rudolph… but do you know the OTHER reindeer?

They were stumped…. OLIVE “the OTHER reindeer!”
… guess who’s on Ratatouille.

As a lover of all things punny, this joke is definitely up there with some of the most cringe-worthy but fantastic holiday jokes, and we applaud Brendan for his bravery to propose this joke exchange to a Cast Member.

It’s so incredible to hear these fun stories come from a Disney Resort that is suffering from divided opinions lately from Guests, especially with the launch of Disney Genie+ on October 19 and the recent petition to fire Disney CEO Bob Chapek.

Both FastPass/FastPass+ at Walt Disney World Resort and FASTPASS/MaxPass at Disneyland Resort are now officially retired, and instead, Disney Genie+ has taking its place — a paid service. Disney Genie+ charges Disney World Guests $15 per person per day to utilize the Lightning Lane — the old FastPass+ queue. Remy’s Ratatouille Adventure is one of these Lightning Lane attractions.

Brendan, a firefighter paramedic, and Air Force medic, added how much the moment meant to him as a Disney Guest:

“It was such a random/special moment. Never in a million years did I think it would work. I thanked her up and down. Told her she didn’t know how much it meant to me.

I was super impressed. I’m by myself this trip […] My birthday solo birthday trip. Little did she know I was here solo on my birthday, needed a break from the reality of working in emergency medicine […] it just goes to show you never know who’s battling what. She had no clue but one simple act of kindness goes a very long way.”

Brendan was activated during the pandemic to care for sick veterans with COVID-19 in nursing homes, and also raises funds to purchase toys for Boston Children’s Hospital – all of which make this Cast Member’s act of magic more amazing.

The Ratatouille ride is so popular that recently, we’ve seen resellers on the online shopping portal eBay have 3D glasses from EPCOT’s Remy’s Ratatouille Adventure for sale.

Of course, these glasses are not sold at Walt Disney World and are a part of the attraction itself. Guests are meant to return the 3D glasses into a bucket at the exit of the ride. The glasses are being sold for $19.99.

Have you ever been able to skip the line at a Disney Park in a fun and unique way? Let us know!