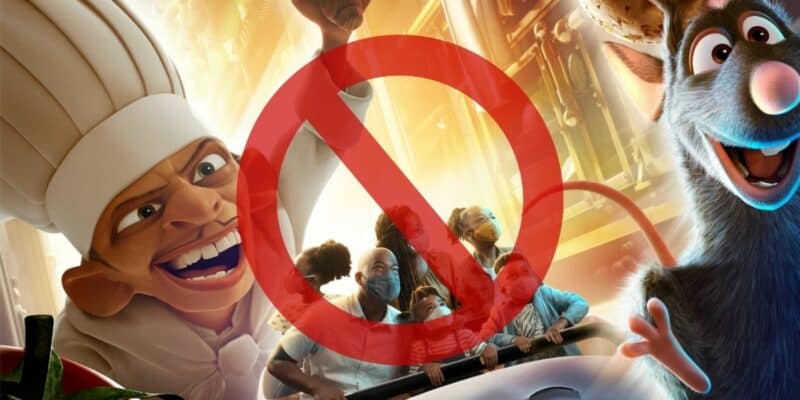 It’s here! “The World’s Most Magical Celebration” has begun at the Walt Disney World Resort in Florida. With new food, new merchandise, and a new nighttime spectacular in the form of Disney Enchantment, the 50th anniversary event has arrived in style.

While Magic Kingdom will likely be the busiest Park today (October 1) a new ride opening at EPCOT has also been extremely popular with boarding groups filling up in seconds.

The 50th anniversary of the Orlando Disney Resort will be celebrated across Magic Kingdom, EPCOT, Disney’s Hollywood Studios, and Disney’s Animal Kingdom. October 1 marks the date that Walt Disney World opened back in 1971, and if these Resort bus queues are anything to go by, Guests are looking forward to celebrating the momentous occasion in theme park history.

Joining the fanfare of The World’s Most Magical Celebration is the opening of the new EPCOT attraction, Remy’s Ratatouille Adventure. Similar to the Disneyland Paris ride, Ratatouille: The Adventure, the new Pixar-themed attraction has finally debuted at Walt Disney World. Located in World Showcase, the ride did open a few weeks ago for Annual Passholder previews.

One thing Guests were seemingly welcoming of when Disney announced the Rise of the Resistance line change was that it was likely to be less stressful to secure a boarding pass while on their Disney vacation. So, how did Guests fare this morning when Remy’s Ratatouille Adventure opened? Let’s take a look.

The boarding pass allocation opened this morning at 7 a.m., and within seconds the virtual queue was closed.

One Twitter user, Roger R. (@rgrrabbit1) posted at 7:02 a.m. that they hadn’t made the boarding group this morning.

Well that was fast… I didn’t make the 7am boarding group for Remy’s Ratatouille Adventure. Let’s see what happens at 1pm… #EPCOT

Well that was fast… I didn’t make the 7am boarding group for Remy’s Ratatouille Adventure. Let’s see what happens at 1pm… #EPCOT pic.twitter.com/Pywl7Dfkvq

TPMvids (@TPMvideos) also commented on social media, stating that the passes were all gone within “5 seconds”.

Tried joining the Remy’s Ratatouille Adventure virtual queue right at 7am and didn’t get a spot. They were all gone within 5 seconds

Tried joining the Remy’s Ratatouille Adventure virtual queue right at 7am and didn’t get a spot. They were all gone within 5 seconds

However, some were lucky enough to get a boarding group. Andrew K. (@andrewkeck) grabbed his ticket for Remy’s Ratatouille Adventure just shortly after they opened.

Another Twitter user, Emmy (@wandavrse), was also celebrating this morning.

I GOT IN THE QUEUE FOR REMY’S WHO ELSE CHEERED

I GOT IN THE QUEUE FOR REMY’S WHO ELSE CHEERED pic.twitter.com/dJ4iaQS6on

Whether the new EPCOT ride will remain as popular throughout the rest of the 50th Anniversary and beyond is uncertain — this quickly-filled virtual queue could be influenced by the volume of Guests visiting the Disney Parks for The World’s Most Magical Celebration. The good thing is, though, if Guests miss their chance at 7 a.m., boarding groups reopen at 1 p.m. meaning, hopefully, all Guests on their Disney vacation will get opportunities to ride.

Are you looking forward to riding Remy’s Ratatouille Adventure at EPCOT? Let us know in the comments!