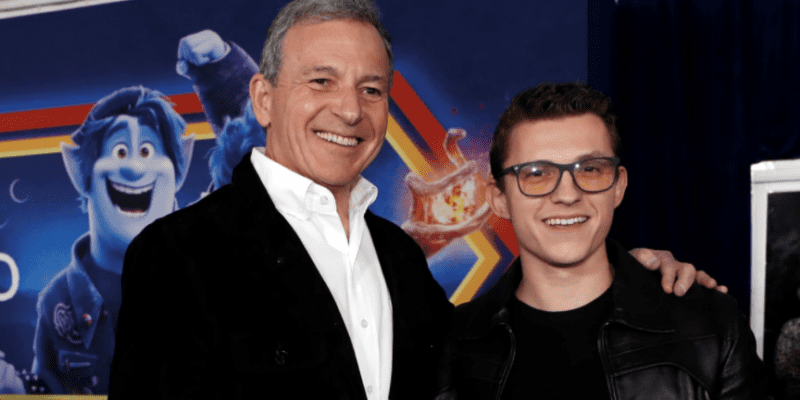 Outgoing Walt Disney Company Executive Chairman Bob Iger is as true of a “company man” as they come. He first began working as a meteorologist for ABC in 1974, two years before Disney purchased the news giant in 1976. Ever since then, Iger has been an integral part of nearly every move that Disney makes.

The former CEO, for example, was responsible for the acquisitions of media giants like Lucasfilm/Star Wars, Marvel Studios, and Pixar Animation Studios over the course of his 15-year tenure.

Now, on the heels of the incredible box office success of the latest installment in the Marvel Cinematic Universe, Iger has taken to social media to congratulate star Tom Holland, with whom he once famously had a drunken conversation (Holland was drunk, not Iger, for the sake of clarity) regarding his continued portrayal of Spider-Man/Peter Parker.

Per our prior coverage:

Iger actually ended up calling that night while Holland was “drunk” at the pub and the conversation basically changed the course of history for the MCU. “I think through that conversation he then opened up a bigger conversation with Tom Rothman and Tony Vinciquerra and they were able to make a deal”, said Holland. If Holland hadn’t answered that call from Iger, Spider-Man: No Way Home (2021) and the entirety of the MCU might have looked incredibly different than it does today.

In response to a recent post in which Holland referenced the well-known discussion, Iger Tweeted:

Hey @TomHolland1996…I’m glad we had that discussion about Spider-Man and congratulations on the success of @SpiderMan No Way Home! Merry Christmas, too!

Hey @TomHolland1996 …I’m glad we had that discussion about Spider-Man and congratulations on the success of @SpiderMan No Way Home! Merry Christmas, too!

At this time, Holland’s contract with Marvel Studios and Sony Pictures has ended, but Spider-Man trilogy producer Amy Pascal has hinted at the potential for a second three-movie collaboration between the two film studios. This remains unconfirmed, however.

As for Iger, he will formally exit his post as Walt Disney Company Executive Chairman on December 31, 2021.

What do you think about Bob Iger commenting on No Way Home?

Comments Off on Bob Iger Thrilled About ‘No Way Home’, “Glad” For Conversation With Drunk Tom Holland