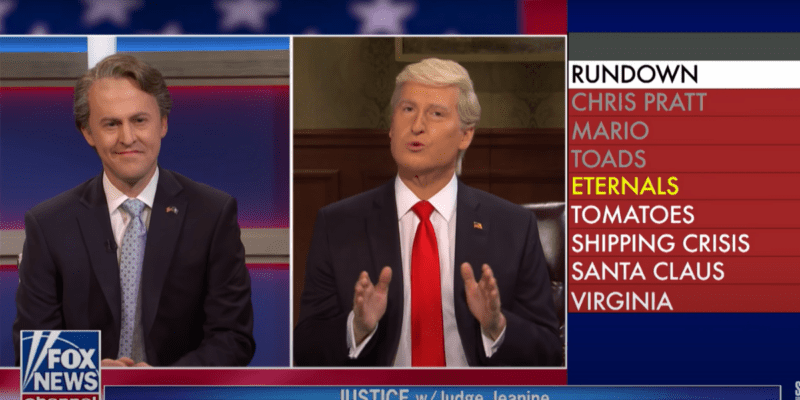 Marvel’s Eternals is an ensemble epic that introduces the Celestial superteam and attempts to flesh out the cosmic side of the Marvel Cinematic Universe. While the film topped the box office in its opening weekend, it undercut industry expectations. Eternals underperformed despite boasting a stacked cast that includes Angelina Jolie (Thena), Salma Hayek (Ajak), Richard Madden (Ikaris), Gemma Chan (Sersi), Kumail Nanjiani (Kingo), Don Lee (Gilgamesh), Lauren Ridloff (Makkari), and Brian Tyree Henry (Phastos) as immortal beings sworn to defend the Earth against aliens dubbed the Deviants — and definitely not Thanos.

Hollywood insiders say the film suffered from mixed reviews, pressure to change or cut scenes in international markets, and review bombing from internet trolls on Rotten Tomatoes. The Marvel Studios tentpole — recognized as having the most diverse cast in the MCU — has come under scrutiny by certain groups for its representation of multicultural and gay characters.

While the media is abuzz unpacking the implications of Marvel’s Eternals shortcomings with fans, Saturday Night Live decided to lampoon the sticky pop culture topic in the cold open of their most recent episode, hosted by Succession star Kieran Culkin. Taking over for last season’s Trump actor, Alec Baldwin — currently embattled in the Rust shooting investigation — newcomer James Austin Johnson performed a spot-on take of the former President.

Related: ‘Guardians of the Galaxy’ Star Arrives on Set For His Final MCU Film

As Trump, Johnson attacked the “PC police” for rejecting Chris Pratt as the voice of Mario. The fake Trump went on to say how much he loved the casting of Pratt, saying Pratt’s Mario will do “… a lot better than that awful Eternals movie.” In character, Johnson elaborated:

“[Eternals] was too diverse and no one wants to see that. The movie’s rotten — just ask the tomatoes.”

The “tomatoes” quip was a reference to the heavily hyped, super low Rotten Tomatoes “Tomatometer” score. Eternals — currently sitting at a “rotten” 49% is the lowest rated Marvel Cinematic Universe movie in history.

Related: We FINALLY Have An Official ‘Spider-Man: No Way Home’ Poster

James Austin Johnson joined the cast of Saturday Night Live as a featured player and was touted as one of the best Donald Trump impersonators in the world. Though, until Saturday Night’s episode, Johnson had only impersonated President Joe Biden. His first Donald Trump sketch was a send-up of the Fox News show Justice with Judge Jeanine and also featured veteran SNL cast members Cecily Strong, Pete Davidson, Alex Moffat, and Heidi Gardner. You can check out the sketch on Saturday Night Live’s official YouTube channel below:

Related: What It’s Like to Visit a Theme Park With a Vaccine Mandate

Many fans wonder if this less-than-expected box office haul and lukewarm audience reception for Eternals is perhaps an early sign of “Marvel fatigue” — even as many industry insiders still say that superhero franchises are the key to getting the movie theater economy back on track.

Marvel’s next feature release is the heavily anticipated Spider-Man: No Way Home (2021), which will hit theaters next month. Starring Marvel Cinematic Universe favorites Tom Holland (Peter Parker) and Benedict Cumberbatch (Doctor Strange) and promising to bring the Sony Spider-Man villains — like Doctor Octopus (Alfred Molina) and Green Goblin (Willem Dafoe) — to the MCU, and No Way Home will likely dispel any notion of Marvel movie fatigue.

Do you think Eternals was “rotten,” or is it getting a bad wrap in the media? Let us know your thoughts!