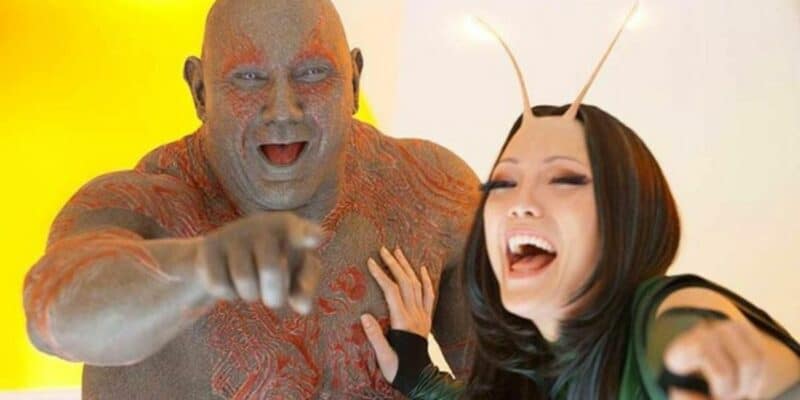 All good things must come to an end, and Marvel star Dave Bautista, best known for his portrayal of Drax the Destroyer in the Marvel Cinematic Universe, is hanging up his Marvel role with Guardians of the Galaxy Vol.3. Today, the actor arrives on set for his final MCU outing alongside Chris Pratt (Peter Quill/Star-Lord), Rocket Raccoon (Bradley Cooper), Vin Diesel (Groot), Zoe Saldana (Gamora), Karen Gillan (Nebula), and more.

Related: Dave Bautista Confirms End For ‘Guardians of the Galaxy’: “We’re Wrapping It Up”

Today, director James Gunn took to Twitter to share a bittersweet photo of his Guardians, including Marvel Universe newcomer Will Poulter as Adam Warlock, arriving for the first day of shooting Guardians of the Galaxy Vol. 3:

It’s been a strange & long & at times challenging journey to get here, but the obstacles along the way have only made this moment more blissful. Back on set with my Guardians family for the first day of shooting.

It’s been a strange & long & at times challenging journey to get here, but the obstacles along the way have only made this moment more blissful. Back on set with my Guardians family for the first day of shooting #gotgvol3 pic.twitter.com/DrF8ZV8bvz

Former WWE Pro Wrestler made the jump to Hollywood and became a household name with his Marvel character Drax the Destroyer in James Gunn’s Guardians of the Galaxy (2014).

Related: Chris Pratt Speaks Out “Upset and Depressed” After Internet Sends Him on Blast

In a turn of events, the Marvel actor announced he would no longer portray the rag-tag universal hero in future any Marvel movie after Taika Waititi’s Thor: Love and Thunder (2022) and James Gunn’s Guardians of the Galaxy: Vol. 3 (2023), both of which he is contractually obligated to appear in.

Bautista will have appeared in six Marvel films, including Avengers: Infinity War (2018) and Avengers: Endgame (2019), by the time Thor: Love and Thunder and Guardians of the Galaxy Vol. 3 hit theaters.

Despite the massive popularity behind the Marvel character, Bautista is ready to move on to new ventures in Hollywood. In a recent interview, the Marvel star shared:

The Knives Out 2 actor has numerous projects in the works and is ready to wrap up his Marvel run, sharing:

“You know, all things must end. And, you know, I’m looking forward to kind of wrapping this up with my friends and family.”

More about Guardians of the Galaxy

Despite the COVID-19 pandemic delaying the release and production of many movies, Guardians of the Galaxy Vol. 3 is staying on schedule, with its original cast and director James Gunn returning for a final outing.

Dave Bautista isn’t the only Avenger to end his Marvel run in an upcoming movie, as Tom Holland is finishing his historic Sony and Disney contract with Spider-Man: No Way Home (2021), a Marvel movie diving into the multiverse.

As a result, these iconic characters could appear in some aspect in future MCU projects or streaming series, like What If…? on Disney+.

The official description of the original Guardians of the Galaxy reads:

An action-packed, epic space adventure, Marvel Studios’ Guardians of the Galaxy expands the Marvel Cinematic Universe into the cosmos, where brash adventurer Peter Quill finds himself the object of an unrelenting bounty hunt after stealing a mysterious orb coveted by Ronan, a powerful villain with ambitions that threaten the entire universe.

To evade the ever-persistent Ronan, Quill is forced into an uneasy true with a quartet of disparate misfits: Rocket, a gun-toting raccoon; Groot, a tree-like humanoid; the deadly and enigmatic Gamora; and revenge-driven Drax the Destroyer. But when Quill discovers the true power of the orb and the menace it poses to the cosmos, he must do his best to rally his ragtag rivals for a last, desperate stand — with the galaxy’s fate in the balance.

Do you think Dave Bautista should be in more Marvel movies? Let us know in the comments below!