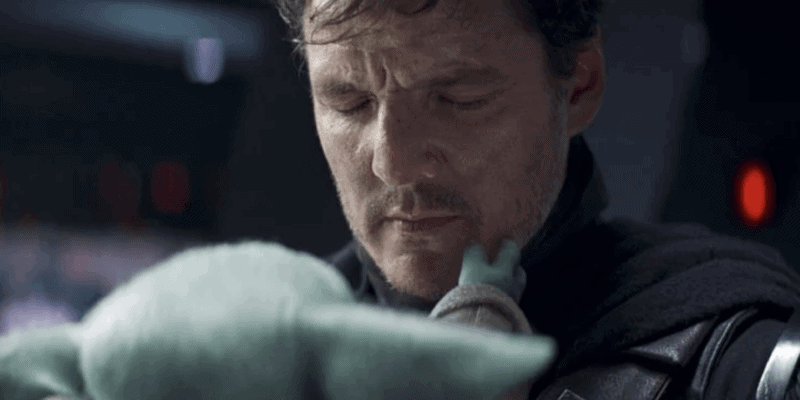 Pedro Pascal had already had a successful Hollywood career before he made his debut as Mandalorian bounty hunter Din Djarin in showrunner Jon Favreau and executive producer Dave Filoni’s The Mandalorian on November 12, 2019.

Notably, prior to his Star Wars franchise debut, the Chilean-born actor had starred as Agent Javier Pena in Narcos and as Prince Oberyn Martell in HBO mega-hit series Game of Thrones.

Nothing, however, could have prepared Pascal — and the rest of The Mandalorian cast and crew — for the pop culture sensation that would occur when Grogu (“Baby Yoda”) first graced television screens alongside the stoic Mandalorian loner.

Over the course of two seasons so far, Favreau, Filoni, and incredible directors like Bryce Dallas Howard and Peyton Reed have taken us on a brilliant journey across the Outer Rim as Djarin and Grogu meet characters new and old — from adventures with Greef Karga (Carl Weathers) and Cara Dune (Gina Carano) on Nevarro to crossing paths with Bo-Katan Krzye (Katee Sackhoff) on Trask to learning Grogu’s tragic backstory from Ahsoka Tano (Rosario Dawson) on Corvus to the epic returns of Boba Fett (Temuera Morrison) and Jedi Knight Luke Skywalker (CGI Mark Hamill) — The Mandalorian has changed the Star Wars universe for the better.

However, you can never please everyone, and it seems that some Star Wars fans would have preferred a different Mandalorian warrior in the title role. A Reddit thread featuring a meme of Boba Fett and Jango Fett’s ancestor, Cassus Fett, reads:

The meme itself says:

Disney chose the wrong Mandalorian…there will be consequences…

Please make this happen. from starwarsspeculation

Other fans agree, with Redditor makrer noting that a deep dive into the Fett family would be an excellent way to learn more about Mandalore’s cultural background:

Good way to keep showing Mandalorian culture, and diving a little more into their history.

Another commenter passionately supported the notion of bringing Cassus Fett — who currently exists only in Star Wars Legends materials — into the existing Star Wars canon:

A response to the above post beseeches Disney to pay attention to the fans on this matter:

This. Disney. Open your friggin giant mouse ears and do this!

Mandalorian Field Marshal Cassus Fett, it is worth noting, lived during the time of the Mandalorian Wars, over 3,000 years before (BBY) the Battle of Yavin in Star Wars: Episode IV – A New Hope (1977). At this time, there are no confirmed Star Wars streaming series or movies that are set to take place during this era — although some believe Taika Waititi’s as-yet-untitled Star Wars film will take place thousands of years prior to any other eras we’ve seen.

Related: ‘Star Wars’ Fans Are NOT Happy Over Lucasfilm Announcement They Begged For

For now, though, fans’ calls to see Cassus Fett become the “next” Mandalorian to skyrocket to fame are purely speculation.

Would you like to see another Mandalorian “replace” Din Djarin as the face of Mandalorian culture?