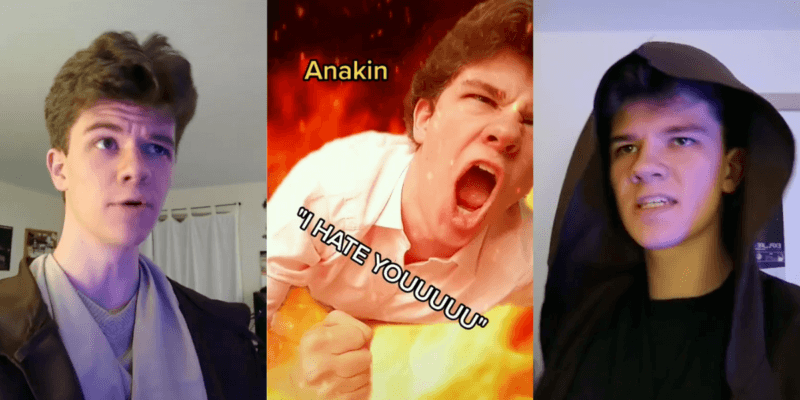 A voice actor and TikTok star that has gone viral for his spot-on Star Wars impressions — like Kylo Ren (Adam Driver) and Obi-Wan Kenobi (Ewan McGregor) — has built up a huge social media following. Star Wars fans can’t seem to get enough of his uncanny Star Wars videos, and now the impersonator is back with even more hilarious viral clips!

Kevin Cabral, the TikTok user behind last summer’s viral “Señorita” Star Wars clip where he delivered a perfect Star Wars impressions riffing off the line “I love it when you call me señorita,” an homage to a Shawn Mendes and Camila Cabello song.

That video and its “sequel” meme totaled more than 700K views. Under the TikTok handle @funklord_vader, the hilarious impersonator and massive Star Wars fan have racked up nearly 140K followers and 37 million likes on TikTok alone – with followers on other social media channels like Twitter also numbering in the thousands.

Since the viral success of his “Señorita” videos, Kevin has tapped into the Force to unleash dozens of hilarious clips inspired by the Star Wars galaxy of characters. In this video, Cabral parodies Star Wars: The Clone Wars as he plays Anakin, Obi-Wan, and Satine discussing the Jedi’s policy on personal attachment.

In one sketch, Cabral tries out several different Gen Z expressions but in the context of a Star Wars meme, played out with characters from across the Skywalker Saga. This one kills not only with the accurate voices (except for Rey Skywalker) but also the hilarious comedy content.

What is your favorite voice in these Star Wars viral videos? Let us know in the comments!

Comments Off on These Viral TikTok ‘Star Wars’ Impressions Will Blow Your Mind!