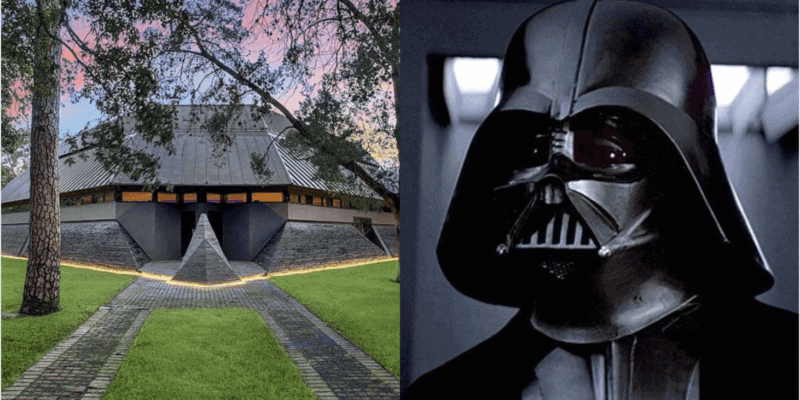 If you’ve ever wanted to live inside of Darth Vader’s head, you’re in luck. A house rumored to be modeled after Vader’s helmet has just hit the market in Houston, Texas and, for a cool $4.3 million, you can own it.

The house has surfaced on a TikTok account known as Zillowtastrophes. In this particular case, the house isn’t so much a  catastrophe as it is simply unique. The TikTok video, which you can view in full below, includes the following information about the Star Wars-inspired Texas residence:

The urban legend I am privy to land in the history of the private residence property near Buffalo Speedway and University Blvd. The home was allegedly built by a surgeon in 1991 to be modelled [sic: modeled] after the mask of Darth Vader. The design lends it way for natural light to arrive through a row of skylights near the top of the unique structure. The entrance is surrounded with a walkway structure that maintains the angle of the front of the home, complimenting the rigid though sleek architecture.

Houston’s lack of zoning guidelines is pretty evident, and even the annexed City of West University, where the structure sits lends itself to parties with enough cash to flaunt their offbeat designs. To be clear, that is not a complaint; I think places like this home are perfect examples of how Houston has been enriched over the years by passionate residents.

The official listing for the home on Zillow includes numerous photos, including an image of the front of the house that does undeniably resemble the Dark Lord’s iconic helmet. Wouldn’t you love to wield your Star Wars: Galaxy’s Edge Darksaber in that front yard?

The interior of the house also has opulent dark side vibes — we can totally see Paul Bettany’s Dryden Vos and Ray Park’s Darth Maul making plans for Crimson Dawn in this living space. Luckily, for the rest of us, there’s the super-sleek Star Wars Hyperspace Lounge.

Even the dining room has major Solo: A Star Wars Story vibes. Tell us you can’t see Emilia Clarke’s Qi’Ra sitting down to dinner with her crime syndicate cronies in this black and white room.

The tour continues in the home office, which also has a serious Sith Lord aesthetic, with its stone floor and take-no-prisoners desk setup. We can just picture Emperor Palpatine (Ian McDiarmid) cutting deals — and cutting throats with his lightsaber — in this room.

The master bedroom and bath also seem to be perfectly suited to someone with a proclivity for the dark side of the Force, with the dark stone floor and slick furnishings continuing through these spaces.

The bathroom even has a black bathtub worthy of Revenge of the Sith-era Anakin Skywalker himself.

Even the back of the Star Wars-influenced home looks like Darth Vader’s iconic helmet. You can almost hear James Earl Jones’s famous baritone…

The official description of 3201 University Boulevard in Houston reads:

Known to many as “ The Darth Vader House” this contemporary masterpiece is one not to miss. Over 7,000 sq., of living, principal bedroom down, open rooms, massive windows, a museum home setting on a prestigious W. University Street. Custom throughout with ample closets, 4 car garage, versatile living spaces, large lot. Nothing else like it in the area. Come visit us Thursday, 12-2.

And, remember, you can catch Darth Vader’s return to the Star Wars universe in 2022 when Hayden Christensen reprises his prequel trilogy role as the Sith villain. He will join Scottish actor Ewan McGregor, who will once again be playing Jedi Knight Obi-Wan Kenobi.

What do you think about this wild Darth Vader house?