How Will Disneyland's Reopening Compare to Disney World's? - Inside the Magic 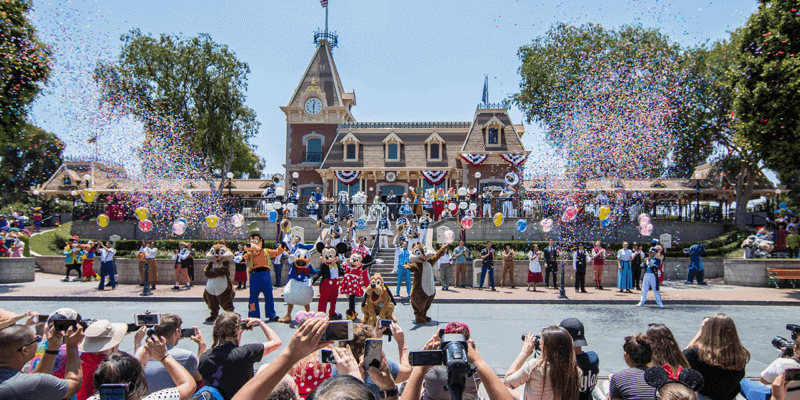 Currently, Disneyland Resort is waiting for Orange County, where it resides, to meet the guidelines for California theme parks to reopen which entails being in the yellow tier of California Governor Gavin Newsom’s Blueprint For a Safer Economy. During Disney’s Q1 earnings call, CEO Bob Chapek stated that vaccinations could possibly accelerate their expectations for welcoming Guests back into the parks, which raises questions about what the next year may be like for Disneyland Resort theme parks and hotels.

How Long Will Health and Safety Guidelines Last?

As of now, the Downtown Disney District and Buena Vista Street inside Disney California Adventure are the only entities of the Disneyland Resort that are open currently open.

In just a few weeks, Disney California Adventure will host an all-new limited-time event, without any rides, focused on food and beverage from around the resort. This has already been a display of the health and safety measures that the Disneyland Resort is taking to keep Guests and Cast Members protected. With Walt Disney World having been reopened since July 2020 and still operating under many strict health and safety guidelines, how long can we expect this pandemic-era protocol to last at Disneyland Resort?

Walt Disney World Resort first reopened its theme parks at a 25% capacity, and we already know that Disneyland will have to do the same based on the state’s official guidelines. For example, appropriate face coverings (i.e., face masks and not neck gaiters or masks with valves) will continue to be worn properly, over the nose and mouth, on Disneyland property. Even those who have been vaccinated currently still have to wear a mask on property.

Though Disney expects to have social distancing and mask requirements at Disney Parks for the remainder of 2021, CEO Bob Chapek shares hope that the state of these guidelines will not be the same for 2022. Therefore, after Disneyland reopens in 2021, we could expect certain rules to ease later on in 2022, based on vaccine distribution, Disney’s predictions, and guidance from California officials and the CDC.

When Will Capacity Limits Increase?

Disney World first reopened its parks at 25% capacity, but in Disney’s Q4 of 2020 earnings call in November, the Walt Disney Company made an announcement that Disney World had increased its capacity to operate at 35%.

Based on California guidelines, Disneyland must reopen at no higher than 25% capacity. Additionally, statements from Disney’s Q1 of 2021 earnings call indicate that neither Disney World nor Disneyland will be further increasing their capacity until the rate of vaccination of the public can be seen.

“Okay, in terms of the outlook for the parks for the rest of the year, and the capacity, it’s really going to be determined by the rate of vaccination of the public. That seems like the biggest lever that we can have in order to either take the parks that are currently under limited capacity and increase it, or open up parks that are currently closed. So, that is — that is sort of the gating factor, if you will. As Christine suggested, we have ample demand for our parks.”

There is no doubt that very high demand will be seen when Disneyland can finally announce that for the first time in forever, they’ll be able to open up the gates.

As Downtown Disney reached capacity on Valentine’s Day through Presidents’ Day 2021, there has been no shortage of desire for the Disney magic that comes with visiting the Happiest Place on Earth. And some have already started to plan their first day back to Disneyland. In response to this expected demand from what will be an over year-long extended closure during the pandemic, Disneyland recently ended its current Annual Passport Program which will be brought back in a reimagined way as quickly as it can.

Some of these former Annual Passholders, now known as Legacy Passholders, are not local to the Orange County area and even from out-of-state. Though traveling to California to visit Disneyland won’t be the same as it once was, Disneyland may still see high demand from out-of-state fans especially with the confirmed opening of Avengers Campus at DCA for 2021.

Again, Disney doesn’t expect to be reopening Disneyland anytime soon, at least not until after Q2, which would make it the earliest to be the end of March or beginning of April. With many variables such as the California state reopening guidelines for theme parks and the rate of vaccinations, it is unclear when exactly Disneyland will be able to reopen.

Stay tuned to Inside the Magic and visit the Disneyland website for the latest news on Disneyland Resort operations.