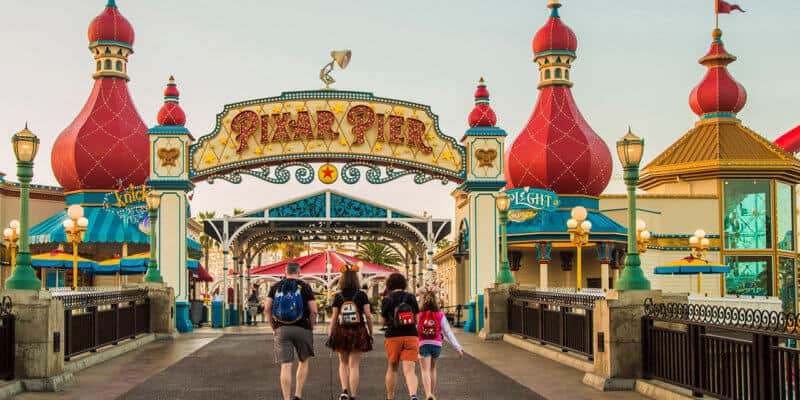 According to the latest Facebook post by Workers United Local 50, a union representing food and beverage workers at Disneyland Resort, dining “will be expanding into Cars Land, Pacific Wharf, Pixar Pier and Grizzly Peak.” The union also shared, “Six Market Place booths, operated by Festivals, are expected to open along the parade route,” and the new ticketed event “will include Buena Vista operations.”

Keep in mind that although the new ticketed event is expected to begin in mid-March at Disney California Adventure, further details have not yet been officially announced by Disney and we continue to await more information. Disney has not yet shared specifically which dining or retail locations will be operating as part of this new event, though more details will come within the month. However, this update from a Cast Member union confirms many fans’ suspicions that more food and beverage options will be opening in several areas of the theme park, beyond Buena Vista Street.

You can read the full post from Workers United Local 50 below:

For furloughed cast being recalled we have been informed that Food and Beverage operations will be expanding into Cars Land, Pacific Wharf, Pixar Pier and Grizzly Peak. Six Market Place booths, operated by Festivals, are expected to open along the parade route. The ticketed offering will include Buena Vista operations.

The 2nd wave of phone calls we mentioned yesterday will begin tomorrow morning.

For non-premium positions the calls will be in seniority order with FT classified cast followed by FT cross trained cast, in the same manner schedules are made. For premium positions (lead, trainer, etc.) FT seniority will be utilized.

Most phone calls will be made from a non-Disney phone number. If you miss the first phone call the company will attempt to call one more time after a 45 minute buffer, to allow cast the time to prepare and be able to take a second attempt. If the second call is missed the company will move on. If you are wanting to return to work you may call back that number and see if the opening has not yet been filled.

If during the call back process you believe your seniority was not observed or the 45 minute buffer was not followed and caused the company to move on contact us directly.

We will post information on the next wave of recalls and other news here. If you have any questions please contact us directly.

The same union also shared a recall update following the announcement of the new event coming to DCA — you can read more here.

Although we don’t know much about the new event coming to Disneyland Resort, we do know this: it will be a separately ticketed event offered for a limited time, and it will highlight food and beverage offerings from around the resort. We expect to hear more details soon, but it’s safe to say Disneyland fans are definitely excited. We speculated that several of our favorite Disneyland things will be offered, though nothing is for sure.

To recap, here is what Disney shared so far regarding the new event:

Currently planned to begin mid-March, we will debut an all-new, limited-time ticketed experience, focused on our world-famous food and beverage offerings from around the resort, the latest merchandise and unique, carefully crafted entertainment experiences…all to be offered multiple days a week. With limited capacity and enhanced health and safety measures in place, Guests once again will get to step into a magical Disney environment — an environment that will provide memorable and fun experiences our Guests are craving.

So, what does this mean? Will the event be similar to the Disney California Adventure Food & Wine Festival? Will we get to dine at Lamplight Lounge on Pixar Pier? How about some delicious snacks from the Cozy Cone Motel in Cars Land, or clam chowder in a bread bowl from Pacific Wharf Cafe? There are plenty of dining locations (both quick service and table service) we hope will open, and there are so many snacks (from Dole Whip to Mickey Beignets) we hope will be sold at this event, but for now, we’ll wait for more details from Disney.

We’ll report back when Disney announces more official details pertaining to the new event coming next month to Disney California Adventure. For now, keep in mind that the Anaheim theme parks of the Disneyland Resort and the hotels of the Disneyland Resort (Disneyland Hotel, Disney’s Paradise Pier Hotel, and Disney’s Grand Californian Hotel & Spa) remain temporarily closed. The Downtown Disney District and, by extension, for the time being, Buena Vista Street are operating — read the latest details here.

What do you hope Disney will bring to this new event at California Adventure? Let us know in the comments.

Comments Off on Disney California Adventure Dining to Expand For New Event!