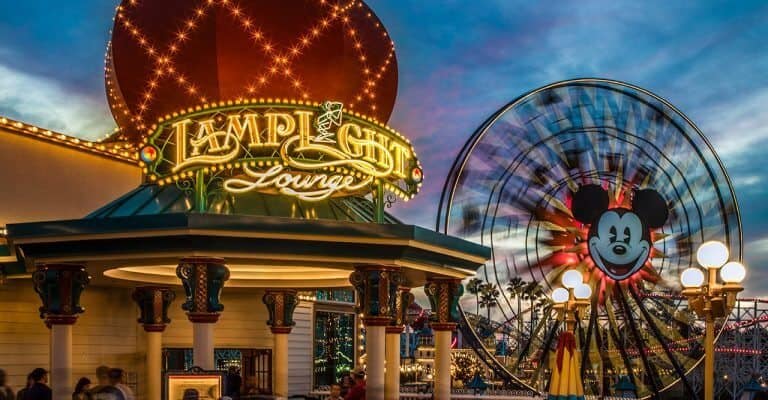 Have you visited Downtown Disney recently? If not, would you head to Disneyland Resort property if it meant you could dine at Lamplight Lounge on Pixar Pier?

Based on the high demand for dining reservations at Carthay Circle Lounge — and the current theme park reopening guidelines still in place — Disney could possibly decide to reopen Lamplight Lounge as part of an expansion of offerings at the Downtown Disney District.

The Downtown Disney District has had a steady flow of visitors ever since it reopened on July 9 — even during the time when dining was banned and capacity was limited even more than it is now. However, there is clearly a high demand for unique Disneyland dining, and this became especially apparent when reservations reopened for Carthay Circle Lounge – Alfresco Dining last week.

In less than an hour — specifically, within the first thirty minutes of reservations opening — nearly all available lunch and dinner times were snatched up by eager Disney fans just itching to dine at Carthay Circle, a restaurant that had not been available for around two months during the temporary stay-at-home order.

Carthay Circle Lounge first reopened on November 19 with the reopening of Buena Vista Street in Disney California Adventure (which, as we know, is currently operating as an extension of Downtown Disney). Just a few weeks later in early December, the restaurant had to close amid California Governor Gavin Newsom’s stay-at-home order and ban on outdoor dining. But the restaurant reopened again on Friday, February 5, and at this time, available reservations are incredibly hard to come by, showing just how in-demand this dining location truly is. At the time of this article’s publication, all available reservations are currently booked through early April.

So, why might Lamplight Lounge on Pixar Pier be the next restaurant Disney decides to reopen inside Disney California Adventure Park? There are a few reasons why we think this is likely to happen, the first being popularity.

Often, during a regular, pre-pandemic day at the Disneyland Resort when the theme parks were open and operating normally, it was much more difficult to get a reservation for Lamplight Lounge on Pixar Pier than Carthay Circle on Buena Vista Street. Although each restaurant hosts delicious food, a unique atmosphere, and fabulous service, Lamplight Lounge is arguably the quintessential Disney California Adventure dining location.

Read more about Lamplight Lounge on the official website here.

Lamplight Lounge opened in 2018 with the opening of Pixar Pier, but it was even popular before when it was known as the Cove Bar and Ariel’s Grotto. The Pixar Animation Studios-themed restaurant serves unique Pixar-inspired beverages (both alcoholic and non-alcoholic) and dishes you can’t find anywhere else on Disneyland Resort property. Plus, the location on Pixar Pier provides magical views no matter what time of day you dine there. As we mentioned, reservations for this restaurant are often hard to come by, so, considering the popularity of Carthay Circle Lounge recently, we wouldn’t be surprised if Disney considered reopening Lamplight Lounge to such a loyal fan base.

Secondly, only outdoor dining is currently allowed in Orange County, CA, due to the widespread COVID-19 cases (read more about California’s Blueprint For a Safer Economy here). To comply with the state guidelines and pandemic protocol, Disney made some adjustments when reopening Carthay Circle, as all tables are currently located outside the restaurant and along the streets of DCA.

Accommodating to state protocol amid the ongoing pandemic won’t be an issue if Disney decides to reopen Lamplight Lounge sometime soon. The open-air restaurant already provides Guests with ample outdoor seating, and dining at the restaurant likely won’t feel dissimilar to the pre-pandemic era.

Plus, if more shopping and dining reopen inside Disney California Adventure Park and there is more space for Guests to roam around, that would mean that Disney would be able to let more Guests into Disney California Adventure while still capping capacity at 25%, and more Cast Members would be able to return to work. Bringing back more Disney Cast Members to the Happiest Place on Earth and providing Disney fans with more opportunities to shop and dine will only benefit the Walt Disney Company.

Oh, and one more thing. If Disney reopens Lamplight Lounge, that would most likely mean Guests could finally feast on the famous Lobster Nachos “for the first time in forever” (or, really, since 2020). Need we say more?

Keep in mind that despite fan speculation and rumors, Disney has not yet confirmed whether there are plans to reopen more of Disney California Adventure to further expand the shopping and dining offerings at the Downtown Disney District. However, knowing that there still isn’t a defined reopening date for the theme parks of the Disneyland Resort we remain hopeful that good news is on the horizon in 2021.

View the latest operations information and health and safety guidelines on the official Disneyland website here.

What do you think? Could Disney decide to reopen Lamplight Lounge — or more shopping and dining inside Disney California Adventure — anytime soon? Let us know in the comments.