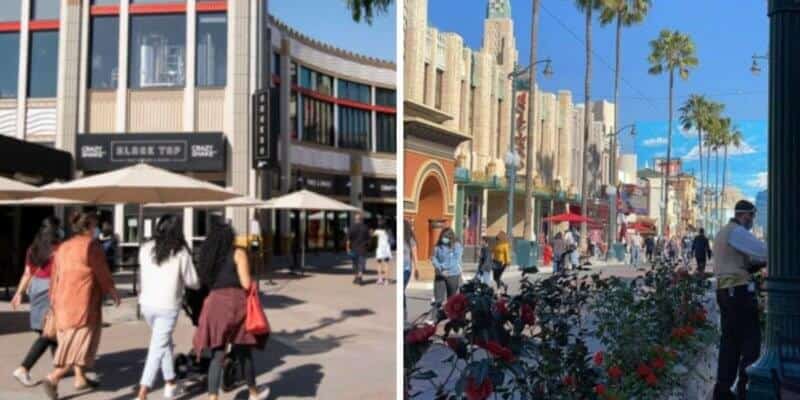 Although both Disneyland and Disney California Adventure have been closed throughout the entirety of the pandemic, the Downtown Disney District has been open to Guests since July 9, with various health and safety restrictions in-place.

In December, California Governor Gavin Newsom instated a regional stay-at-home order that impacted Orange County in southern California, where Disneyland Resort is located. The order, among other things, prevented Guests from consuming any food or beverages on-property at Downtown Disney and the partially reopened Buena Vista Street area of Disney California Adventure Park.

Now, however, the order has been lifted and Guests are allowed to dine outdoors at Downtown Disney once again. As a result, crowds are flocking to the eating and shopping center.

Before the latest stay-at-home order was put in place, fans would visit Downtown Disney and Buena Vista Street to get a taste of Disneyland Resort, although both Disneyland Park and Disney California Adventure remain officially closed. Capacity, at times, would even fill within five minutes of the district opening.

Most recently, the Disneyland mobile app, and Disneyland.com reopened reservations for table service dining and reservations booked up in minutes! Securing a spot for Carthay Circle Lounge – Alfresco Dining is nearly impossible at this time.

Now that dining is once again an option for Guests, crowds are once again returning to Disneyland property.  Keep in mind that capacity is still limited to 25%.

As previously stated, when the stay-at-home was lifted, it impacted both Downtown Disney and DCA’s Buena Vista Street, which means that capacity was raised from 20% to 25%, and the dining and shopping in that section of the theme park are now available for Guests to indulge in, although all rides and attractions remain closed.

Paul (@paulsthemeparkadventures) was at Downtown Disney as dining fully reopened. Although Paul noted that the crowds were much larger now, he also said, “My experience today has been great and from what I’ve seen everyone has been following the rules and Cast Members have been enforcing them.”

As we can see from Paul’s photo, Downtown Disney is once again bustling with Guests! That being said, there is still plenty of distance for Guests.

When Downtown Disney hit capacity in the past, only Guests with dining reservations were able to enter. Therefore, if you wanted to go out to eat at Downtown Disney — especially on a weekend — we still recommend you take a look to see what dining reservations are available for you and your party. Reservations are currently available 60 days in advance for dining, though most of them have been snatched up already due to high demand and low capacity.

For now, both Disneyland and Disney California Adventure will continue to stay closed. Until Orange County is able to hit the minimal yellow tier — which would mean one positive COVID-19 case per 100,000 residents — Governor Newsom will not allow the parks to reopen under current theme park reopening guidelines.

Currently, some members of the California State Assembly are asking Governor Newsom to reconsider the existing guidelines in order to allow theme parks to reopen sooner.

On the east coast, however, Walt Disney World Resort is open! Disney Springs (Disney World’s version of Downtown Disney) is packed with Guests daily who are returning from a magical filled day at either Magic Kingdom, Disney’s Hollywood Studios, Animal Kingdom, or EPCOT! Soon, Guests will be able to add Blizzard Beach to that Disney park list as it reopens March 7, 2021. With the newly opened Gideon’s Bakehouse in Disney Springs, it is no wonder that both coasts have Disney foodies flocking to have one of the many snacks both shopping and eatery locations provide.

Check back with Inside the Magic to get all the latest Disneyland updates!

Have you been back to Downtown Disney lately? How did you find the crowds? Let us know below in the comments.