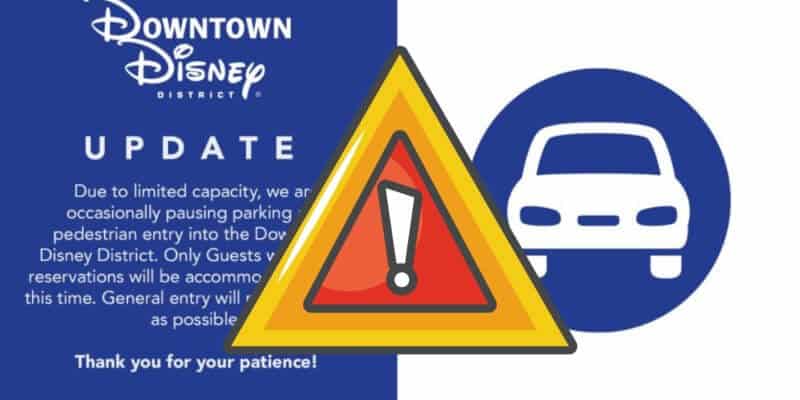 It looks like the folks of California cannot wait to get their Disneyland fix. As we all await the reopening announcement of Disneyland Resort for the Disneyland and Disney California Adventure theme parks, our only taste of the magic in SoCal is at Downtown Disney.

Downtown Disney at Disneyland Resort opened at 10:00 AM PT today and only 5 minutes after opening we received this tweet:

Due to limited capacity, we are occasionally pausing parking and pedestrian entry into the Downtown Disney District. Only Guests with dining reservations will be accommodated during this time. General entry will resume as soon as possible.

The parking lot at Downtown Disney often opens prior to the district around 9:45 AM daily, but to hit capacity in mere minutes only continues to prove the demands Disney fans have to re-enter DLR. We have seen Downtown Disney release similar messages on weekends as the Disneyland shopping and dining district often sees more visitors on weekends, but this may be the fastest we have seen it hit capacity since its reopening.

It seems that the best way to secure your entry to Downtown Disney on the weekend would be to snag a dining reservation at one of the restaurants on Disney property.

Is DLR ready to open?

The anticipation to re-enter Disneyland Resort is not unwarranted. We know that DLR has been ready to open both of its parks since July according to Parks Chairman Josh D’Amaro. Disney executives, including Disneyland Resort President Ken Potrock have been pleading to the state of California and Governor Newsom to reopen the park. Disneyland may be ready, but without the theme park reopening guidelines from the state, they are left twiddling their thumbs.

Some have pointed out contrast between the approaches of Governor DeSantis in Florida and Governor Newsom is quite stark. Newsom is still waiting to give Disney the plans to reopen the theme parks, while DeSantis is giving the green light for Walt Disney World to open up back to full capacity, if they choose to do so. Although Disney World has not said they would be following the state’s new allowance, it is interesting to note how different the rules are coast to coast.

Are you heading to Downtown Disney this weekend? Let us know!