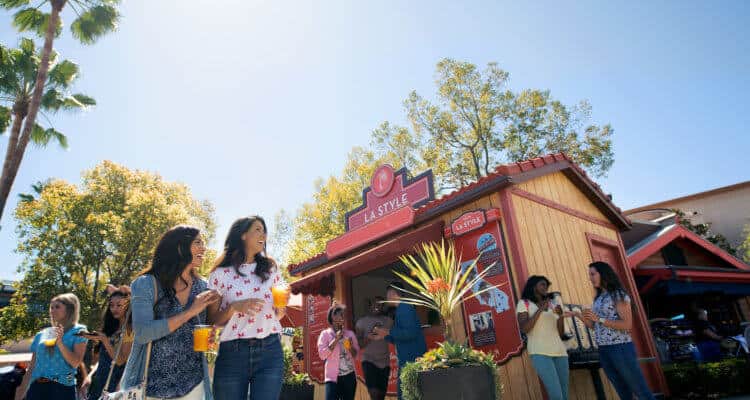 This week, on the 20th anniversary of the opening of Disney California Adventure Park in Anaheim, California, Disneyland Resort President Ken Potrock announced that a new limited-time ticketed event will be coming soon to DCA, allowing up to 1,000 Cast Members to return to work.

Although Disney has not explicitly stated that this event will be the same as the Disney California Adventure Food and Wine Festival (which typically runs throughout March and April at the theme park), the company did announce that food and beverages “from around the resort” will be a highlight of the event. Therefore, it is expected for food service workers to be recalled back to work in order to prepare for and work the upcoming event set to open in mid-March.

One day after Disneyland President Ken Potrock made this announcement, a union representing Disneyland Resort Cast Members shared an update on workers being recalled.

Read More: Disney California Adventure Event: What Can We Expect?

In Vending a small amount positions for Cashier, Maintenance Coordinator, and Receiver Assistant are to be filled.

Festival operations will resume in some manner for this round of recalls. These positions will be available to everyone in Food and Beverage. A small amount of positions for Receiver lead, Receiver Assistant, Dinner Cook trainer, OC trainer, HOH lead, and FOH lead are to be filled.

As we get more information we will share that information here. Contact us directly if you have any questions.

Recall Update,Recall notifications are expected to begin as early as tomorrow for furloughed members. This first wave…

The specific details of the new event at Disney California Adventure remain unclear. We know that it will be “an all-new, limited-time ticketed experience, focused on our world-famous food and beverage offerings from around the resort, the latest merchandise and unique, carefully crafted entertainment experiences.” It will begin sometime next month, it will be offered multiple days per week, and there will be a fee to enter. However, other than that, plenty of unknowns remain.

Disney has shared that more information is expected to be released in the coming weeks, so stay tuned to Inside the Magic for those details as we receive them.

The recall of even more food service workers at Disneyland coincides with the end of the stay-at-home order in Southern California.

At the end of January, California Governor Gavin Newsom put an end to the temporary stay-at-home order in Southern California, allowing the Downtown Disney District (and, by extension, for now, Buena Vista Street inside Disney California Adventure) to operate with shopping and outdoor dining per the Blueprint For a Safer Economy reopening plan for California. Just a couple of weeks after outdoor dining returned to the currently open areas of the Disneyland Resort, Disney announced that they would be expanding offerings at Disney California Adventure, allowing even more Cast Members to head back to work in the coming weeks.

If you are looking to help Disney Cast Members, click here.

If you are a laid-off, furloughed, or current Cast Member in need of assistance, click here.

What do you think of this news? Let us know in the comments!