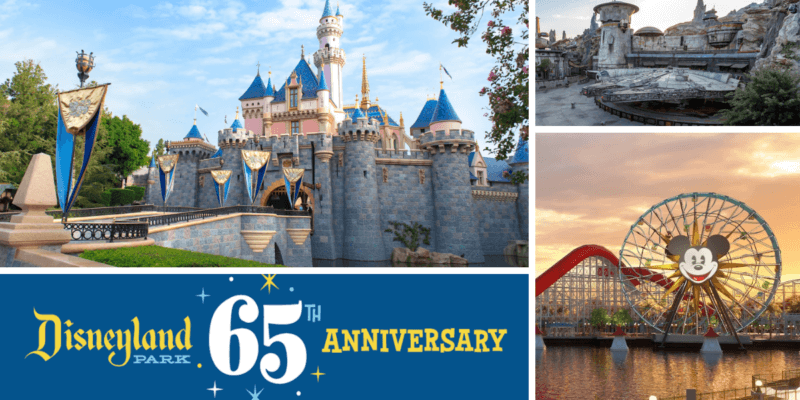 The theme parks of the Disneyland Resort — as well as the three onsite hotels — have been closed since March due to the ongoing pandemic. With only the Downtown Disney District (and, by extension, Buena Vista Street in Disney California Adventure) open to the public, it’s no secret that a lot of magic is missed at Disneyland Resort right now. The theme parks are not operational, and there are some things that Disneyland Guests have missed out on during the closure that may be going on one whole year.

For the first time in forever (in six whole decades, as a matter of fact) Disneyland was closed on Christmas Day. But aside from missing this milestone — the Christmas festivities in the year of Disneyland’s 65th birthday — there are some other celebrations parkgoers haven’t been able to experience, including what may have been a magical 65th anniversary of the original Magic Kingdom.

Here, we take a look at what milestones Disneyland has reached since the closure, and what we may not get to experience in 2021.

As Disneyland Resort had only been closed for just over two months by the time the one-year anniversary of Galaxy’s Edge rolled around, there is no telling what could have been. We imagine that Disney may have had a lot planned to commemorate such a great milestone for this highly immersive land, though so much time has passed that it’s unclear. Still, while it would have surely been a treat to eat a ronto wrap, drink some blue milk, and pilot the Millennium Falcon on May 31, 2020, we know we can look forward to all of those things in the future when Disneyland reopens.

In Summer 2020, Disney announced plans to reopen Disneyland Park and Disney California Adventure Park in time for the 65th anniversary of Disneyland Resort — and then delayed them.

However, as we know, the parks are still closed, and there were no special celebrations planned at Downtown Disney. The only way to commemorate Disneyland’s 65th at the time was to purchase special merchandise and meander through the Downtown Disney District, perhaps even taking a selfie in front of the Disneyland Park gates. But unless you were a die-hard Disneyland fanatic or a merchandise collector, there likely wouldn’t have been any way for you to realize on July 17 that it was Disneyland’s birthday.

By now, in 2021, it would appear that the anticlimactic 65th anniversary of Disneyland has come and gone. July 17, 2020, was marked by the theme park almost-opening, some promotional merchandise, and the realities of the pandemic. We know we can forward to celebrating other milestone anniversaries for the Disney Parks — such as Disneyland’s 75th anniversary in 2030, and of course Walt Disney World’s 50th anniversary this year — in the future. Still, there is some hope for more celebrations for the Disneyland Resort in 2021. Disneyland President Ken Potrock even shared hope for the future.

This year marks the 20th anniversary of Disney California Adventure and the Downtown Disney District, two expansions of the Disneyland Resort. As of 2021, the theme park opened 20 years ago on February 8, 2001.

At this time, not much has been said about the 20th anniversary of these two areas of Disneyland Resort, other than the statement that “Disney California Adventure and the Downtown Disney District will be celebrating their 20th anniversaries in January,” from a recent D23 post.

So, what does this mean? Well, much like for Disneyland’s 65th, we are likely to see plenty of new merchandise for DCA’s 20th. But could we see more than that?

Right now, we’re not so sure. If the theme park was open, we would likely expect some sort of celebration to commemorate the park’s two-decade milestone. We would imagine that Disney would have wanted to mark the occasion with some special promotions or even events. After all, the second theme park at the Disneyland Resort turning 20 years old is definitely a big deal! IF we weren’t in a pandemic, we would have loved to see a parade like Paint the Night (introduced in the U.S. during Disneyland’s 60th-anniversary celebrations) at DCA to commemorate the occasion. But since the theme park is closed and there is no reopening date announced yet, it is likely that we will never know how exactly Disney would have wanted to celebrate Disney California Adventure’s 20th birthday.

We’re still holding out hope for good news later on in 2021 once the park opens up — and it’s certainly exciting to know that such a highly anticipated land as Avengers Campus will open the same year as the park’s 20th anniversary. Perhaps the opening of the new Marvel-themed land will be more than enough of a celebration to make up for any special events that could have occurred at the start of 2020 in honor of DCA.

The Downtown Disney District may also welcome shopping and dining locations to introduce deals in celebration of the 20th anniversary. We wouldn’t be surprised if several retail locations and eateries provided Guests with saving offers to commemorate the 20th birthday of Downtown Disney. However, nothing is for certain at this time, as Southern California is still under a stay-at-home order.

Related News: What We Can Expect From Disneyland Resort in 2021

When it comes to Disneyland Resort operations, not much has changed since our last update. Below is the most up-to-date information on the current closure, as stated on the official website:

At this time, we’re looking forward to meandering the streets of Disneyland Park and Disney California Adventure Park as soon as the Happiest Place on Earth opens up the gates once again. Plus, we know that there are plenty of others who are just waiting to get to dine at Carthay Circle Lounge or snack on a classic Disneyland churro as soon as California’s stay-at-home order is lifted and dining is allowed onsite again.

We’ll update our website with more information on Disneyland Resort operations — as well as any news about celebrating the 20th-anniversary milestone of Disney California Adventure and Downtown Disney — as soon as it is released.

Are there any milestones or celebrations you have missed since Disneyland closed in March 2020? Let us know in the comments.