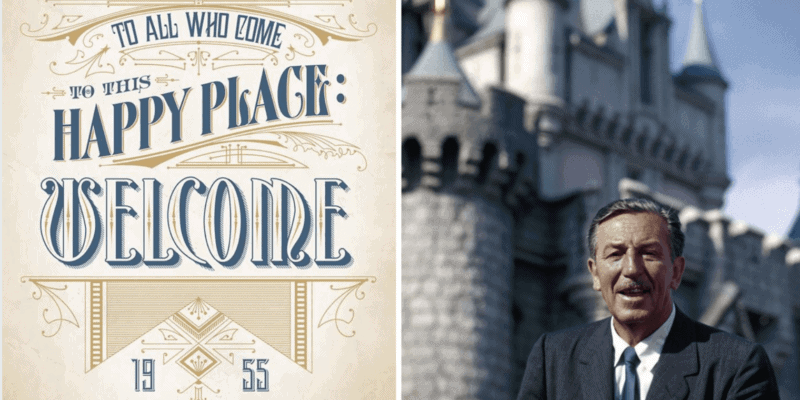 On July 17, 1955, Disneyland Resort was supposed to be hosting an “international press preview.” The asphalt on Main Street, U.S.A. was not yet dry and many other details, including the plumbing system, were not yet finalized.

That morning, however, over 20,000 eager Guests flocked to the gates of Disneyland Park in Anaheim, California, unable to wait to see Walt Disney’s magical world. Now, Disneyland Resort is one of the most popular theme parks on earth and the magic continues to evolve for generation after generation.

Today marks Disneyland’s 65th Anniversary and, although Disneyland Park and Disney California Adventure have not yet reopened to the public, there are still plenty of ways you can celebrate the Happiest Place on Earth at home.

Watch the construction of Disneyland

California’s Disneyland Resort is the only Disney theme park in the world that Walt Disney directly oversaw every aspect of. Disney passed away before Walt Disney World in Florida was completed.

This time-lapse video that shows the construction of Walt’s beloved theme park is a fun way to get in the spirit of today’s sapphire anniversary celebration!

Get inspired by Walt Disney quotes

Walt Disney was nothing if not inspirational. Enjoy these great quotes by the man who started it all to add some inspiration and motivation to Disneyland’s birthday.

We know it’s tough to not be able to experience Disneyland rides and attractions in-person right now. Fortunately, we’re sharing a virtual tour of Disneyland Park, so you can experience the magic virtually until the park reopens.

This round-up of virtual Disney Parks rides and attractions will give you the opportunity to watch Disneyland’s incredible Magic Happens parade, ride the Incredicoaster at Pixar Pier, and relax on the legendary it’s a small world ride.

Keep your hands and feet inside the ride vehicle at all times!

Learn more about the Disneyland Railroad

Walt Disney loved trains, so he made sure Disneyland had its very own railway system. Discover more about the famous Disneyland Railroad as you celebrate the history of this iconic theme park.

If you enjoy crafting, try your hand at making a paper version of Main Street, U.S.A. Use printable sheets provided by Walt Disney Imagineering for this activity the whole family will love.

The Walt Disney Family Museum is hosting an online “Community Day” to celebrate 65 years of magic at Disneyland. From noon to 5:00 PM today, the museum will be offering Q&A sessions with Disney Parks announcers and Instagram Disneyland trivia games, along with other streaming events.

Beginning tomorrow morning at 7 AM PST (10 AM EST), Disney Parks Guests will be able to visit shopDisney.com to purchase items from the Disneyland 65th Anniversary merchandise collection. Remember, quantities of certain items will be limited, so shop early if there’s something you want to snag!

Watch The Imagineering Story and other Disney+ shows

The Imagineering Story celebrates the Imagineers who have been bringing Disneyland Resort and other Disney parks to life for over six decades now.

Streaming the first several episodes of the Disney+ series today will help you understand exactly how Walt and Roy Disney (and their incredible imagineering team!) made Disneyland into the magical place it still is today.

Happy 65th Birthday, Disneyland! We can’t wait to see all of the magic you still have in store. Like Walt said on opening day, “To all who come to this happy place, welcome!”

Share your favorite Disneyland memory in the comments. What will you do to celebrate Disneyland’s 65th Anniversary at home?

If you have plans to visit Disneyland Resort when it reopens, contact the experts at Academy Travel. They will help you with everything from making dining reservations in the Downtown Disney District to planning your perfect Disney Park Star Wars day at Galaxy’s Edge, they will make sure your vacation is perfect.

Comments Off on Happy 65 Years, Disneyland! How to Celebrate at Home