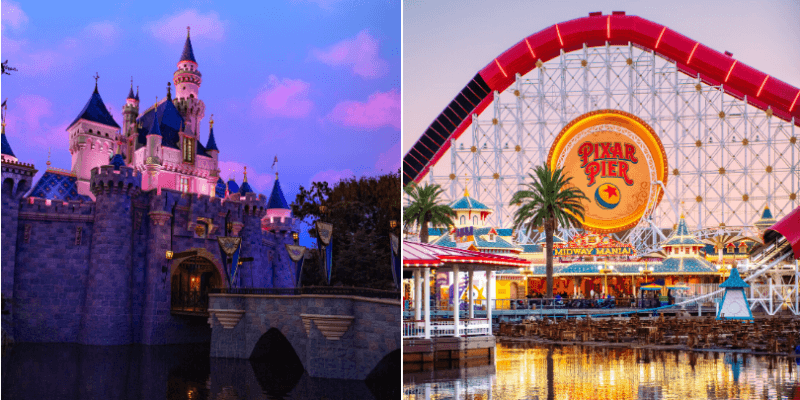 “Sixty-five years to the date after the historic opening of Disneyland park, we are planning to open our theme park gates once again on July 17, 2020, welcoming guests back to the Disneyland Resort,” Disneyland Resort Public Relations Director Michael Ramirez wrote in the announcement today on Disney Parks Blog.

According to the announcement, Disneyland Resort has officially submitted plans for reopening. Once approved, Downtown Disney (the shopping, dining, and entertainment district on Disneyland Resort property) will reopen on July 9. Next, the phased reopening will continue with the reopening of Disneyland park and Disney California Adventure park on July 17. Finally, two of the resort’s on-site hotels (Disney’s Paradise Pier Hotel and Disney’s Grand Californian Hotel & Spa) will reopen to Guests on July 23.

Disneyland has also confirmed that at this time, there is a temporary pause on new ticket sales, annual pass sales, and annual pass renewals. There will also be reservations required to enter the theme parks.

“Disneyland holds a special place in the hearts of people around the world. It was created as a place where family members of all ages could have fun together – a place to leave today and enter the world of yesterday, tomorrow and fantasy. Sixty-five years later it still is.,” Ramirez wrote. “It’s time for magic – and we look forward to welcoming you back.” 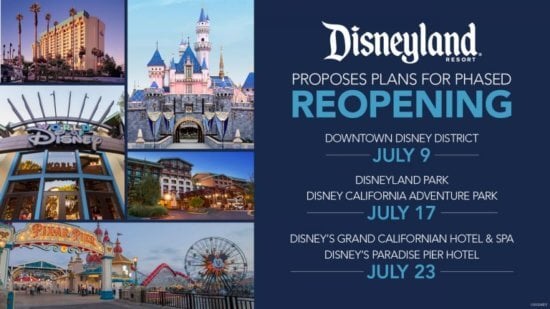 Below is the official announcement:

Disney Parks, Experiences and Products Proposes Plans for the Disneyland Resort to Begin a Phased Reopening July 9, with Proposed Reopening of the Theme Parks July 17

Because theme park capacity will be significantly limited to comply with governmental requirements and promote physical distancing, the Disneyland Resort will manage attendance through a new theme park reservation system that will require all guests, including Annual Passholders, to obtain a reservation for park entry in advance. Theme park reservations will be subject to availability. More details about this new reservation system will be available soon. At this time, there will also be a temporary pause on new ticket sales and Annual Passport sales and renewals. Additional details will be available soon. Please check Disneyland.com for the most current information.

Once approved, the Disneyland Resort will reopen with enhanced health and safety measures. In addition, a Guest Experience Team will be available throughout the parks and Downtown Disney District to assist guests with questions regarding these new policies.

Certain experiences that draw large group gatherings – such as parades and nighttime spectaculars – will return at a later date. While character meet and greets will be temporarily unavailable, characters will be in the parks in new ways to entertain and delight guests.

Pending governmental approval, Disney’s Grand Californian Hotel & Spa, Disney’s Paradise Pier Hotel and Disney Vacation Club Villas at Disney’s Grand Californian Hotel & Spa are planned to reopen to guests and members starting on July 23. Plans to support physical distancing as well as increased cleaning measures, along with a number of other health and safety protocols, will be implemented as part of the phased reopening of the hotels and the Vacation Club.

Downtown Disney District will begin reopening on July 9 in line with the state’s reopening guidelines, with its unique variety of shopping and dining experiences, including the flagship World of Disney store. With the health of guests and Disney cast members at the forefront of planning, several operational changes will be implemented based on guidance from health authorities to promote physical distancing and cleanliness throughout the Downtown Disney District.

Additional information on enhanced health and safety measures and operational changes for reopening locations will be shared soon. These policies are under continuous review and are subject to change as the Disneyland Resort monitors conditions and receives guidance from health and government authorities.

Comments Off on THIS JUST IN: Disneyland Reveals July Reopening Date!