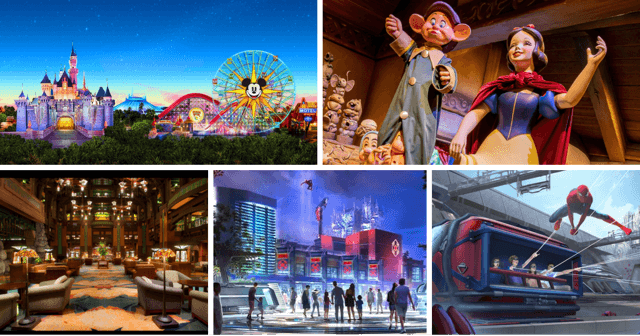 2021 is an entirely new year compared to what many would say was the most difficult year. The Disneyland Resort, included, has had quite the year. The resort closed in mid-March due to the current pandemic, and so much has changed since. So, what can we expect from Disneyland Resort in the near future?

Although the parks have not been fully operational since March 2020, that didn’t stop renovations and construction. Some projects may have been delayed, but many eventually resumed while the parks remained closed.

2021 also happens to be quite the celebratory year. Disney California Adventure Park and the Downtown Disney District will both be celebrating 20 years of magic! Hopefully this means we can look forward to anniversary themed merchandise and perhaps treats, but only time will tell!

Speaking of DCA, one major project that was well underway when the pandemic hit is Disney California Adventure’s development of Avengers Campus. The new Marvel-themed land was originally supposed to open in summer 2020. Now, we know that one of the land’s major attractions had made some major progress. The WEB-SLINGERS: A Spider-Man Adventure attraction has some pretty impressive ride vehicles — you can read more information here. There is so much more to look forward to at the Avengers Campus, from the Spider-Man stuntronic to the E-ticket attraction featuring a Quinjet to some unique character encounters. We can’t wait to see more in 2021, as Disney confirmed this land will open this year.

The opening day attraction Snow White’s Scary Adventures is getting a magical transformation! Aside from having new technology and a brand new ending, the attraction now has an all-new name. Snow White’s Enchanted Wish attraction will be filled with new imagery and more magic for Guests to enjoy in 2021.

Since late 2020’s stay-at-home order was put into place and then extended, staying at a Disneyland Hotel will most likely be pushed well into 2021.

Recently, the resort announced reservations for the Grand Californian Hotel & Spa’s Villas would be available for Disney Vacation Club Members. Due to the stay-at-home order, the villas remain closed and will be open at a later date. There has been no official reopening date for Disney’s Grand Californian, Disney’s Paradise Pier Hotel, or the Disneyland Hotel. But with the eventual reopening of The Villas for DVC Members, it could get Guests closer to a magical stay at the Disneyland Resort. Many expect for the DVC villas to be the first part of any of the hotels of the Disneyland Resort to reopen.

As we all wait to get back to the magic, the Disneyland Resort has been ensuring the health and safety of their Guests and Cast Members. In the summer of 2020, we saw the resort really take action to promote health and safety measures. Plexiglass barriers were put in place at the entrance gates. All around Downtown Disney and the newly reopened Buena Vista Street we can see signage to remind Guests of maintaining safe distance and masks are required. Even hand washing and hand sanitizing stations have been put in many locations. Going forward, we can definitely expect to see such measures throughout the parks and the entire resort. Safety has always been a staple that Disneyland has kept top of mind in order to help preserve the magic of their parks and resorts. So, I don’t think we can expect anything less from the Disneyland Resort.

Even though 2020 has proven to be a difficult year for all — and while we continue to await a reopening date for Disneyland and Disney California Adventure — we’re looking forward to more Disney magic in the year 2021! Like many of us, Disneyland Resort President Ken Potrock is remaining hopeful for the new year ahead.

What would you like to see from the Disneyland Resort in 2021? Let us know in the comments!