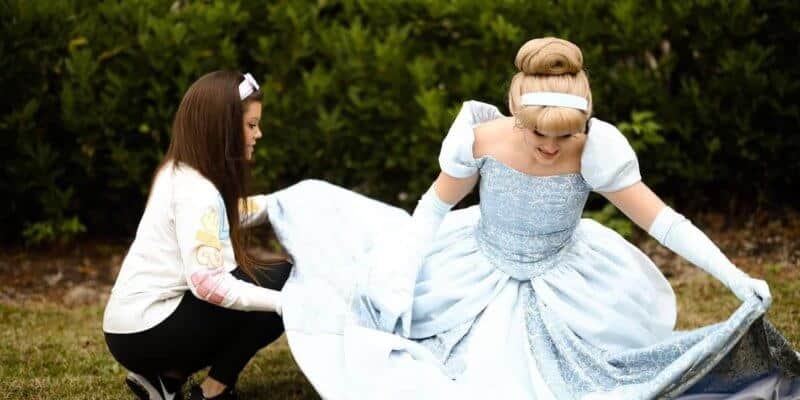 In 2020, as a result of the ongoing pandemic, the Walt Disney Company let go tens of thousands of Cast Members at Disneyland Resort and Walt Disney World Resort.

Notably, theme park entertainment was hit particularly hard. Some of our favorite Disney Parks acts were let go, including The Grand Floridian Society Orchestra, Hoop-Dee-Doo Revue, Monsters INC. Laugh Floor, Frozen Live at the Hyperion, and many more. Disney has begun slowly bringing back some entertainment acts as they recently announced that a version of The Festival of the Lion King will be returning to Disney’s Animal Kingdom, but many Cast Members are still without work and, at least for now, remain laid-off.

Unfortunately for some entertainment Cast Members, 2020 was an abrupt and permanent end to a dream job. That’s where Olivia Grace and her company came in to save the day.

Olivia Haines-Robery is a real-life Fairy Godmother. A former entertainment Cast Member herself, she went on to create her own magical entertainment company after her time at Walt Disney World. When Olivia saw Cast Members being let go in 2020, she decided she would take it upon herself to make a little magic and bring closure to their experiences as entertainers at the theme parks.

Olivia Haines-Robery used her own time and money to bring costumes, accessories, and makeup across the country from her home in Michigan to Orlando, FL. She offered free photo sessions to those who were let go from the Walt Disney Company and never got the chance to say goodbye to the characters and roles they loved so much, giving closure and making magic for over 50 former entertainment Cast Members.

I got in touch with Olivia and asked her about her motivation for this beautiful Disney-inspired project. Here’s what she shared with us at Inside the Magic:

“My heart broke when I saw what was happening to my Disney entertainment family. I don’t think people understand, performing a role with Disney takes your whole mind, body, and soul. You fall in love with your characters and when you leave the company (or even worse, are unexpectedly let go), it’s devastating. I remember when I left my performing role with the company, I would have given anything for one more day with Ariel. Just for some closure — a chance to say goodbye, and the opportunity to thank her for all the magic we created together.

Since leaving the Disney company, I started my own character entertainment brand — and it has always been my top priority to provide theme-park quality characters and interactions. So, I’ve invested thousands of dollars into creating costumes and characters to represent that brand. When I saw what was happening in Disney entertainment, I knew I had the ability to help these girls get their closure — and I couldn’t just stand by when I had the power to help. I wish there had been someone willing to do that for me when I needed it!”

I went on to ask Olivia what this project meant to her and why she felt this was so important:

“I have to say, seeing the emotional reactions on the girls’ faces as they stepped into costume once more – perhaps for the last time — made my heart explode. For many, this experience was the perfect ending to the most incredible fairytale. They said goodbye on their own terms — and that’s all we ever really wanted. So far, I’ve done ‘farewell photos’ with over 50 former Disney Performers, and the requests keep coming in. I made a promise to myself I would donate my time and company’s supplies to help as many girls who want the opportunity to say goodbye to their characters as possible. Us Disney Entertainment girls — we’re a family — it’s what we do.”

We love this story of a real-life fairy godmother making dreams come true, it is truly inspiring and reminds us that an act of kindness can go a long way.

If you want to see more information about the Olivia Grace Company, you can read more details on their official page here.