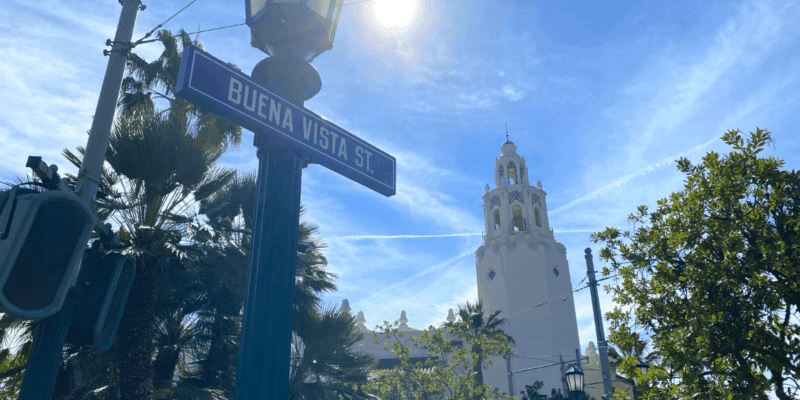 The Downtown Disney District hit capacity multiple times throughout the holiday weekend, signaling — as expected — a high demand for Disneyland.

In the early afternoon Monday, the Downtown Disney District at the Disneyland Resort hit capacity and stopped allowing new Guests to enter. Often when capacity is reached, the Simba parking lot will stop allowing new vehicles to park and the line for temperature checks will stretch throughout the parking lot for Disney’s Paradise Pier Hotel and Disney’s Grand Californian Hotel & Spa, adjacent to the Disneyland Hotel.

When we visited on Sunday, Valentine’s Day, we were able to enter Downtown Disney from the Simba lot very quickly, having arrived just after 10 a.m. However, by 11 a.m. and shortly after, it was estimated that it would be a wait of approximately two and a half hours to enter Downtown Disney, and that long line persisted throughout the afternoon and early evening.

Onsite dining just returned to the Disneyland Resort in late January after California Governor Gavin Newsom ended the regional stay-at-home order for Southern California. Although only outdoor dining is allowed and capacity is still limited, the availability of dining continues to bring more people to Disneyland property.

An important note to make before your visit to Downtown Disney — or, by extension for the time being, Buena Vista Street in Disney California Adventure — is that if you want to dine at a table-service restaurant, reservations are highly recommended. If you attempt to enter Downtown Disney during a busy day (or time of day) and it has reached capacity, then the only way to guarantee entry is if you have a reservation — be it a dining reservation or a reservation for a shopping experience, like the Legacy Passholder preview of the new Star Wars Trading Post. Therefore, if you know that, no matter what, you want to be able to visit Downtown Disney anytime soon, you should look into making a reservation to ensure that you will be allowed to enter.

As a reminder, the Downtown Disney District at the Disneyland Resort is currently only operating at 25% capacity, so it is common for that capacity to be reached throughout the week during the busiest times of day on the busiest days of the week, such as Fridays or Saturdays at dinner time or Sundays for brunch. The fact that capacity was reached today is likely due to the holiday weekend (as Monday is Presidents Day) combined with the high demand for Disney magic in Southern California.

Limited capacity is just one of the many health and safety measures in place at Disneyland Resort amid the ongoing pandemic. Read more on the official website here.

Have you visited Downtown Disney recently? Do you think there is a high demand for Disneyland right now? Do you plan to visit for the new event? Share your thoughts with us in the comments.