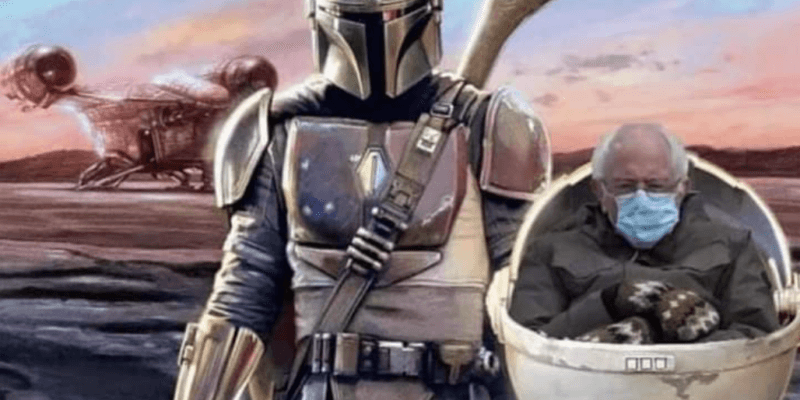 Who knew that all it would take to bring America together was social media and a pair of recycled wool sweater mittens knitted by a Vermont school teacher?

The original trilogy cast — including Hamill, Harrison Ford (Han Solo), and Chewbacca (the late Peter Mayhew/Joonas Suotamo), pictured above in the Millennium Falcon with Sanders — aren’t the only ones getting in on the fun, though.

The cutest Star Wars character in the galaxy, The Mandalorian’s Grogu (AKA Baby Yoda AKA The Child), is also getting in on the Bernie Sanders meme fun. Below, we’ve rounded up some of the funniest Baby Yoda memes fans have created following last week’s Presidential Inauguration.

One Twitter user posted two Bernie Sanders x Grogu memes, one of the tiny green foundling wearing Bernie’s mittens and another of the U.S. Senator holding the adorable character tightly during the Inauguration Day ceremony. The caption reads:

A friend sent me these and I’m –

A friend sent me these and I'm –#TheMandalorian #grogu #babyyoda #berniesanders #bernie pic.twitter.com/BWD3BPxSHe

I had to make my own Bernie pic – with Baby Yoda, of course!!!

I had to make my own Bernie pic – with Baby Yoda, of course!!! #BernieSandersMittens #Mandalorian #Grogu #BabyYoda @PedroPascal1 @BernieSanders pic.twitter.com/74dSAunNUt

Flipping the narrative, another Bernie and Baby Yoda meme features this same The Mandalorian Season 2 scene, but with Sanders piloting the Razor Crest. Aimee Dansereau posted:

Of all the Bernie memes floating around, this one’s my favorite!

Of all the Bernie memes floating around, this one's my favorite! #BernieSanders #BernieMeme #berniesmittens #BabyYoda #Grogu pic.twitter.com/m2i22ltrxt

Mashable shared a montage of Bernie memes, including one of the Senator and Grogu “spilling the tea,” featuring the Force-sensitive infant sipping his beloved cup of soup.

Bernie and Baby Yoda are spilling the tea pic.twitter.com/6y7wsL5aU2

Finally, if you’re really interested in showing your love for both The Child and the Senator’s mittens, you can support Bomster Foo’s sticker proposal:

MOOD Until the new season of Mandalorian arrives

Going to be doing more stickers this year. Would you want this @BernieSanders and Baby Yoda as one?! Comment below!

MOOD Until the new season of Mandalorian arrives ❤️

Going to be doing more stickers this year. Would you want this @BernieSanders and Baby Yoda as one?! Comment below! #StayToOoned

Currently, Mandalorian creator Jon Favreau and executive producer Dave Filoni have not commented on where Grogu will show up next in the ongoing Mandalorian saga.

When we last saw the cute character, he was being spirited away to complete his Jedi training by none other than Luke Skywalker himself (a CGI version of original actor Mark Hamill) and iconic droid R2-D2. This necessitated a tearful goodbye with Djarin in The Mandalorian Season 2 finale episode (“Chapter 16: The Rescue”).

However, the Mandalorian bounty hunter did promise he would see “his child” again, so we can rest assured that Favreau and Filoni have a plan to reunite the duo. Whether this will happen in the upcoming The Mandalorian Season 3 or a spinoff series, though, hasn’t been confirmed.

At this time, The Mandalorian has three confirmed spinoffs — Ahsoka, Rangers of the New Republic, and The Book of Boba Fett — with a fourth spinoff revolving around Luke Skywalker and his Star Wars Legends wife, Mara Jade, rumored to be in the works as well.