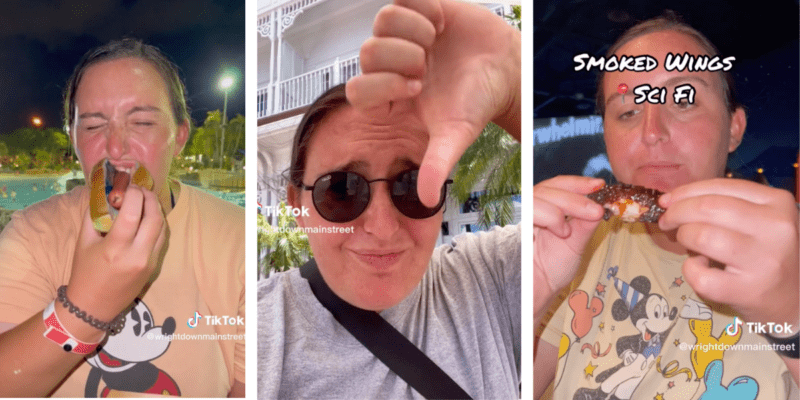 In November 2021, we reported on an unpopular comment from The Walt Disney Company CFO Christine McCarthy during a quarterly earnings call. After announcing that Walt Disney World Resort and Disneyland Resort would cut food portion sizes to save money, McCarthy said the change would be “good for some people’s waistlines.”

Many Disney Parks fans were offended by these comments. Fans have already noticed decreased portion sizes at Disney Parks, and many report declining food quality as prices increase.

Starting with Disney’s Hollywood Studios, the TikToker said to avoid any seasonal milkshake from Hollywood Scoops: “Don’t be fooled. They are weirdly warm, not the right consistency, and extremely overpriced at about $10.”

Next, this Disney Foodie says to steer clear of any “generic” Quick Service macaroni and cheese. While she tried the pasta from Gasparilla Island Grill at Disney’s Grand Floridian Resort & Spa, she argued that all Quick Service mac and cheese “used to be amazing” but has “gone downhill.”

Back at Disney’s Hollywood Studios, the TikToker said hungry Guests at Disney’s Sci-Fi Dine-In Theater should not order the Smoked Wings at $15 for four. “This is a poor excuse for a wing, honestly,” she said. “They are covered in way too much sauce, and they are so tiny.”

Over at Disney’s Typhoon Lagoon Water Park, the TikToker tried a “Glow Dog” during the hard-ticketed Disney H2O Glow After Hours event and wasn’t pleased with the results. “The hot dog itself was… not good, and then it was topped with a blue-dyed cheese sauce. I’ll leave it at that.”

But the number one thing this TikToker wouldn’t recommend is the truffle mac and cheese from Citricos, also at Disney’s Grand Floridian Resort & Spa. “This is mushroom overload, and it was just off paired with the gnocchi pasta,” she said. “I very rarely do not finish what I order, but after a few bites, I threw in the towel with this one.”

Do you agree with this Disney Foodie’s opinions? What are your favorite foods at Magic Kingdom, Disney’s Hollywood Studios, EPCOT, Disney’s Animal Kingdom, and Disney Springs?