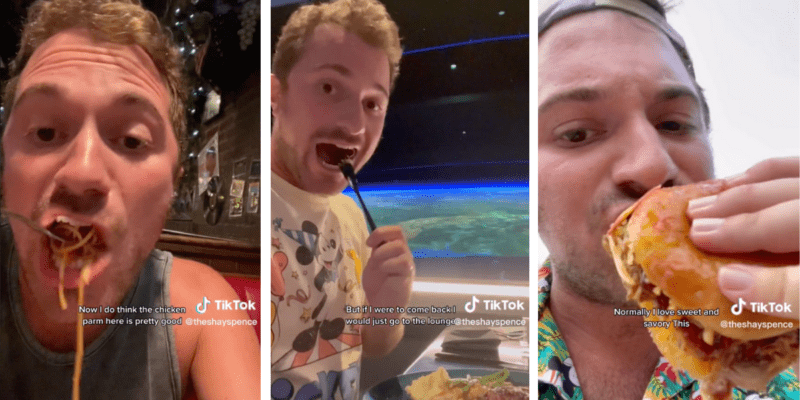 Last November, we reported on an unpopular comment from The Walt Disney Company CFO Christine McCarthy during a quarterly earnings call. After announcing that Walt Disney World Resort and Disneyland Resort would cut food portion sizes to save money, McCarthy said the change would be “good for some people’s waistlines.”

Many Disney Parks fans were offended by these comments. Fans have already noticed decreased portion sizes at Disney Parks, and many report declining food quality as prices increase.

Shay Spence (@theshayspence), an avid Disney Parks fan and self-proclaimed “Professional Eater,” shared his thoughts on the food quality at Walt Disney World Resort this week with a video about the five worst things he tried at the Florida Disney Park in 2022:

It isn’t all negative, though. Spence offered a delicious alternative with each lousy review!

Spence started with the salmon entree at Space 220, a third-party-operated fine dining restaurant at EPCOT. He said it was “bland” and, although they’ve changed the recipe, he recommended the steak. Better yet, Spence suggested making a reservation at the Space 220 lounge and ordering fried cauliflower bites with bleu cheese dust to save money on the prix fixe menu.

“I really like eating here. I’ve got a soft spot for it. I love the Muppets. I love the theme,” Spence said. “The Margareta Flatbread, though, I’m sorry, is a definite no for me. The crust is kind of cardboardy. Sauce to topping ratio is just off.”

Instead, Spence suggested ordering the chicken Parmesan. For those dead set on pizza, he recommended going to Via Napoli in EPCOT or Pizza Ponte at Disney Springs.

Spence chose churros from every Magic Kingdom cart as his third-worst Walt Disney World food offering. “They just don’t get them right at Disney World, especially compared to Disneyland.”

However, there was one exception. Nomad Lounge at Disney’s Animal Kingdom offers a gluten-free churro that Spence called “fantastic.” He also recommended the fried cinnamon roll bites from EPCOT International Flower and Garden Festival.

Spence’s “most tragic pick” was at Disney’s Typhoon Lagoon Water Park, which is currently closed for refurbishment. He said to avoid the Crabless Crab Cakes.

“I could not decipher any of the ingredients in this,” Spence said. “It was just kind of bland mush with an unnecessary mango chutney on top.”

Spence recommended the plant-based bratwurst for a better plant-based meal at the Water Park. “But honestly, I kind of stick to sweets at Typhoon Lagoon.”

Do you agree with Spence’s picks? What are your worst Walt Disney World and Disneyland Resort foods of 2022?