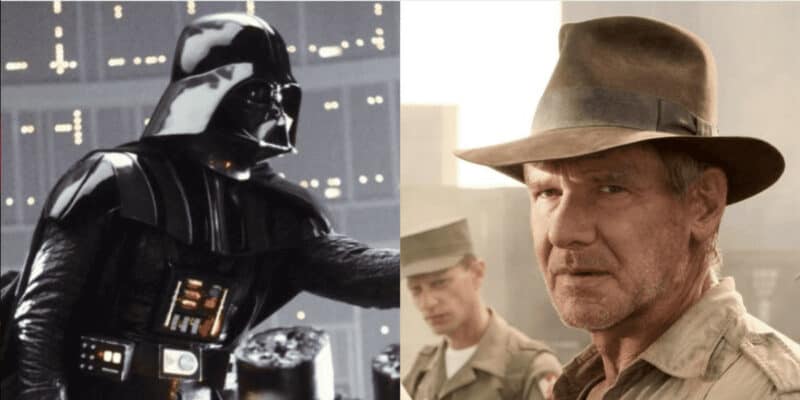 Indiana Jones (Harrison Ford) and the Galaxy Far, Far away?

For years now, fans of the Indiana Jones franchise have been dying for news from Lucasfilm surrounding the archaeologist, and the long awaited new film. All the way back in 2016 Kathleen Kennedy and Lucasfilm announced that there would be a new Indiana Jones film, and that all the key players would be returning, Harrison would don the hat, and pick up the whip, Steven Spielberg would even be returning to direct, and audiences could expect a 2019 release…but, plans change.

Countless delays, a change in directors, and so many other issues led fans to believe that we really wouldn’t be seeing another Indy anytime soon. Then, little details began to emerge. Harrison Ford was seen in costume in England, rumors about casting began to fly, and then, all of a sudden, it was official! Disney released posters with images from the film, and the incomparable John Williams conducted a live performance of a piece he composed for the film. In recent weeks, the news has been a downpour, images, screenshots, and just yesterday, the long awaited trailer took the breath of many audiences. As Harrison Ford said at the 2022 D23 Expo, it certainly seems this film will “kick your a**”.

Sharp eyed fans noticed something in the trailer however, something that may just be a connection between Doctor Jones, and the Scruffy Looking Nerf Herder from the Galaxy Far, Far away. The trailer, full of nostalgia, and the return of fan favorite, Sallah (John Rhys-Davies), teases plenty of action, and adventure, offering audiences a glimpse at the much touted de-aging of Harrison Ford, Mads Mikkelsen’s Voller sporting an ominous uniform, and even a  glimpse at the titular McGuffin, the Dial of Destiny.

However, that’s not the only thing the trailer teased. According to several fans, a nod, or even a direct reference to the Millennium Falcon was spotted!In response to the trailer, @ReadWryt said:

He wasn’t the only one to pick up on it either! @roysonforlife replied:

Why is he driving the millennium falcon?

Why is he driving the millennium falcon? pic.twitter.com/EHoS2ljKCK

Whether Ford’s classic character will be taking his cue from his Star Wars counterpart, Han Solo (Harrison Ford), or, it’s a simple coincidence is yet to be seen. Director James Mangold has not commented on the image, but has shared the trailer on his personal Twitter page, and is obviously excited for and passionate about the subject. With so many sour feelings still lingering towards Indiana Jones and the Kingdom of the Crystal Skull (2008), fans hope that Mangold is able to return that feeling of adventure audiences came to know and love in Raiders of the Lost Ark (1981), Indiana Jones and the Temple of Doom (1984) and Indiana Jones and the Last Crusade (1989).

The fifth installment in the franchise, Indiana Jones and the Dial of Destiny will hit theaters June 30, 2023, and stars Harrison Ford as Henry Jones Jr./Indiana Jones, Phoebe Waller-Bridge as Indy’s goddaughter, Helena, and Mads Mikkelsen as the menacing Voller.

Could this tie Star Wars into Indiana Jones? Or is it just a coincidence? Let us know in the comments below!