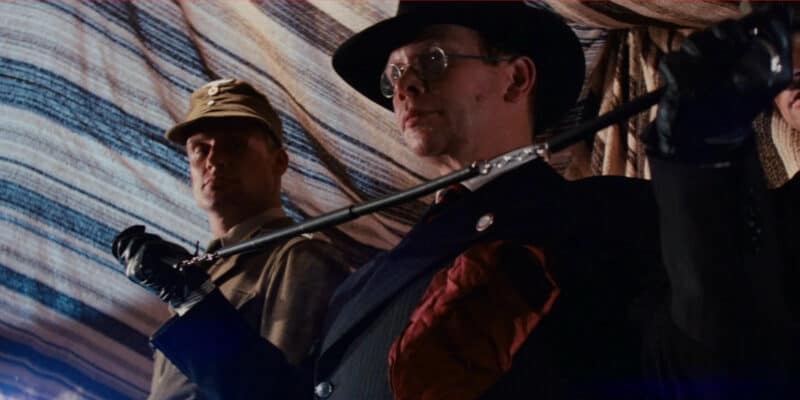 In a banner news week for Indiana Jones (2023), fans have been treated to a veritable deluge of new images , and it seems like they just keep coming! Not only have we received new images of Harrison Ford from the new sequel, but, we’ve also been given a glimpse into the character and motivations for the film’s new villain, Voller (Mads Mikkelsen). Revealed just today in an image from Empire, Mikkelsen’s character is a throwback to the days of Raiders of the Lost Ark (1981), and the original villains Indiana Jones is famous for combatting:

Indiana Jones 5 will pit Indy against Nazis again, in 1969. Meet Mads Mikkelsen’s villainous Voller. “He’s a man who would like to correct some of the mistakes of the past,” he tells Empire.

Indiana Jones 5 will pit Indy against Nazis again, in 1969. Meet Mads Mikkelsen’s villainous Voller. “He’s a man who would like to correct some of the mistakes of the past,” he tells Empire.

Longtime fans of the series will recognize an undeniable resemblance between Mikkelsen’s new character, and the classic villain from Raiders, Major Arnold Toht (Ronald Lacey), the gestapo agent sent in to get information from Marion Ravenwood (Karen Allen), and ends up searing an image of the Staff of Ra headpiece into his hand. Whether or not Voller (Mikkelsen) is a true throwback to Toht (Lacey), or just visually reminiscent has yet to be revealed.

What has been revealed, however, by Mikkelsen himself, is a little bit more background about the menacing new villain:

This statement also introduces, albeit in a cryptic way, the McGuffin, or the item that Dr. Jones will be searching for, this ‘something that could make the world a much better place’ could be the artifact akin to the Ark of the Covenant or Holy Grail that spurred the adventure in Raiders and Indiana Jones and the Last Crusade (1989). The question remains, ‘make the world a better place’ for whom?

The first installment in the franchise since Indiana Jones and the Kingdom of the Crystal Skull (2008), Indiana Jones (2023) is to be released sometime next year, and features a star studded cast, including the return of Harrison Ford himself as Professor Jones, John Rhys-Davies as Sallah, Phoebe Waller-Bridge as a new character, Helena, and Mads Mikkelsen as the new villain Voller.

What do you think about Mikkelsen’s new villain, Voller? Let us know in the comments below!