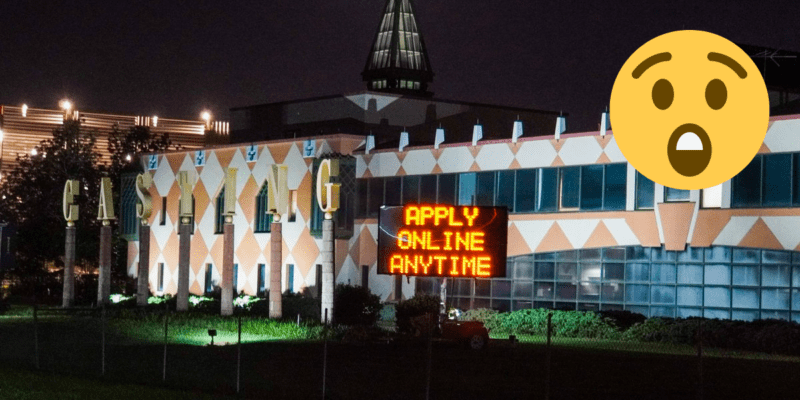 Chapek was later replaced by his predecessor, Bob Iger. Though Iger is rumored to have voiced dissatisfaction with many of Chapek’s decisions, the reinstated CEO confirmed that he planned to proceed with the hiring freeze just days ago.

Just days before said hiring freeze was announced, Walt Disney World Resort was so desperate for applicants that they installed a rented construction sign board outside of the Casting Building near Disney Springs:

Rented message board at the Walt Disney World Casting building. Faces I-4.

Rented message board at the Walt Disney World Casting building. Faces I-4. pic.twitter.com/XThEkvLa13

We visited the Florida Disney Parks this week to see if the signs had been removed. But it was quite the opposite. In fact, Walt Disney World Resort installed a second sign advertising a job fair from 8 a.m. to 4 p.m. on Wednesday, November 30.

It’s a tough time to be a Disney Cast Member. Job satisfaction at Disneyland Resort and Walt Disney World Resort is reportedly at an all-time low, especially as The Walt Disney Company continues to suffer staffing shortages post-COVID-19 layoffs.

Walt Disney World Resort is also wrapped up in negotiations with six workers’ unions. The Disney Park offered unionized Cast Members a $1 raise while the unions demanded a $5 pay boost. The unions plan to protest on November 30.

Inside the Magic will continue to report on hiring decisions at The Walt Disney Company.