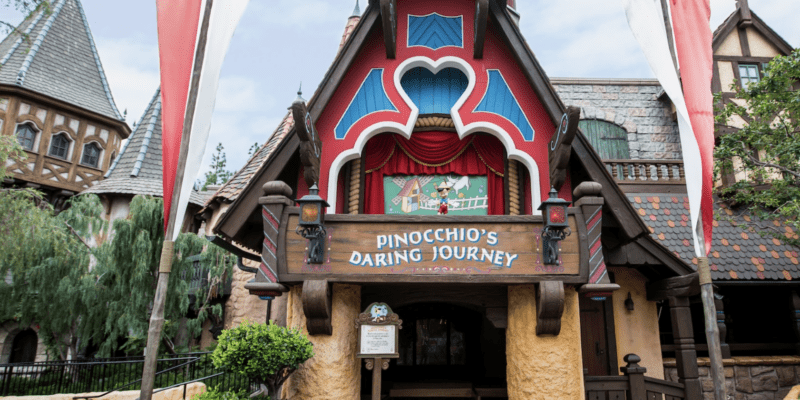 Disney often works hard to ensure that all of their attractions are up-to-date and functioning correctly, but for some rides, after years of use without refurbishment, some things may be in need of adjustment.

At Disneyland Resort in California, many attractions were updated not too long ago for the 60th anniversary, as well as many since then. For example, Snow White’s Enchanted Wish is one of the most recent dark rides to get a massive revamp, not only affecting the animatronics and show scenes but the plot of the attraction as well. The Jungle Cruise attraction in Adventureland also recently saw a lot of storyline changes to keep the culturally offensive sections out of the ride, and soon we will see Princess and the Frog take over Splash Mountain.

Lately, it seems some Guests have been noticing a few other dark rides in need of a touch up at Disneyland as they are “too dark” making it tough for Guests to see what is going on while they ride.

Ready4orbit posted to Reddit asking if lights have been turned off on Disney attractions as of late.

Does Disneyland turn off some of the lights on the dark rides on low capacity days?

I just visited Disneyland this last Tuesday (Feb 8) and felt like a lot of the dark rides were… well… EXTRA dark. Pinocchio was barely lit with most of the scenes and props unlit. Same with Snow White. On Peter Pan Neverneverland was in darkness (isn’t it usually lit). Space Mountain had no galaxies or nebulae…

Has anyone else noticed this? Am I crazy?

Does Disneyland turn off some of the lights on the dark rides on low capacity days? from Disneyland

Kfurt13 responded that the lights do not get turned down due to capacity, but that maintenance repairs may be in order.

They don’t turn off lights, but maintenance has been lacking so I wouldn’t be surprised if bulbs haven’t been changed or are getting dimmer. Dark rides will also appear darker in the middle of the day when your eyes haven’t adjusted from the bright sun outside.

Phased5ek agreed with the low lighting, and confirmed that this is clearly an ongoing issue being noticed.

you’re definitely not crazy, at least as far as Pirates of the Caribbean is concerned. i can’t speak for your aforementioned rides since i hadn’t been on them — well, except Snow White once in Dec just to see the revamped story to it and it was well-lit. PotC has been overly dark, especially at balancing pirate / pig pirate / drunken pirate on the bridge section near the end. their torches (and flaming mug of grog + grog jug) aren’t lit up for starters, and it’s maybe half as lit up as it normally is.

i don’t think the lights are turned off because it’s a low capacity time since the days i was there in Dec (6th – 12th) and Jan (6th – 12th) had some fairly large crowds, especially on the weekend dates. i think it’s more that there is some maintenance that has to be done either to the lighting itself or else to certain parts of the ride that they are trying to hide in darkness for particular scenes that would be too glaring an issue to spot if it was fully lit.

Queester also noticed this on a recent visit but assumed it was just rides in need of a repair.

Just came back from a trip last week and noticed the same thing, but chalked it up to misremembering since it had been a while. I’m glad to know I’m not crazy, but sad to see so many rides in disrepair.

Another comment that was noted a lot was that depending on the time of day, Guests may have a harder time adjusting to the darker lighting, however, even with sunshine, it should not feel impossible to see what is around you on a ride. Last week we rode Pinocchio’s Daring Journey, and my first comment was that I could barely see any of the set pieces or animatronics, it was the darkest Disney attraction I had ever been on! It seemed that not only is the ride in need of maintenance for the lighting, but the black light paint may also need some refreshing as well.

Disneyland describes the ride as:

Wish Upon a Star
Hop aboard a woodcarver’s cart at the Stromboli Puppet Theatre, where Pinocchio is singing and dancing in a festive marionette show.

A Classic Film and a Famous Song
The Disney animation classic Pinocchio debuted in 1940 and is notable for, among other things, its main song.

“When You Wish Upon A Star” not only won the 1940 Academy Award® for Best Original Song, but also went on to become the unofficial theme song for The Walt Disney Company.

What other attractions do you think are in need of some TLC at Disneyland?