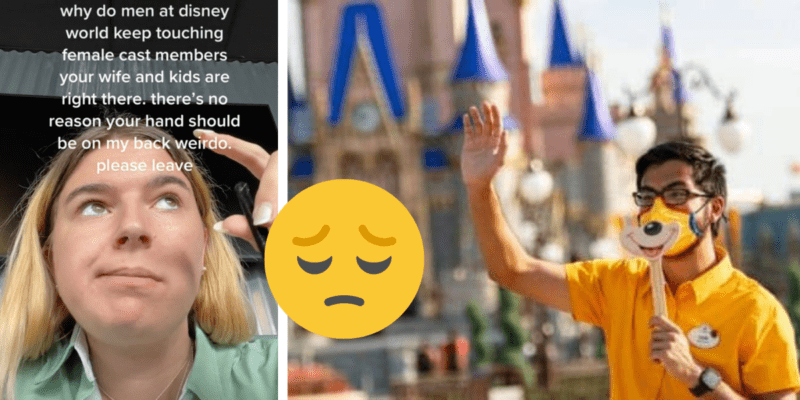 Disney Cast Members make the magic happen at Walt Disney World Resort. Despite the constant stress and bustling environment, Disney Parks employees do their best to give every Guest the most wonderful experience possible.

Last week, we reported an unfortunate trend of Disney Cast Members being targeted with sexual harassment from their colleagues. Sadly, this behavior often extends to Guests. One brave EPCOT Cast Member, Jamie (@fckjamie), shared a video from work after a male Guest put his hand on her back while his family stood nearby:

“Why do men at Disney World keep touching female Cast Members?” Jamie asked. “Literally kids are better behaved [than] these men,” they added.

Many other Disney Cast Members came forward in the comments about similar behavior from Guests. “This!!! you do not need to have your hand on my LOWER back to ask a question,” one said.

“The amount of men that have openly tried to flirt w me when I’m trying to keep their family safe or in the midst of helping their family,” another wrote.

“I had a man yesterday say to me ‘you’re f*cking adorable’ right in front of [his] wife and kids. I was soooo creeped out,” one Cast Member recalled.

“I had a man keep his hand on my shoulder the entire time I was taking his order while his whole family was standing right next to him. LIKE SIR,” another said.

“I was a character performer and the amount of inappropriate things people did to us in front of their families… shocking,” one TikToker wrote. Character performers are often the targets of harassment from Guests, especially Disney princesses. Some characters have even had their costumes altered or been removed from the Disney Parks altogether due to sexual harassment.

Please be respectful of all Cast Members when visiting Walt Disney World Resort, Disneyland Resort, or any Theme Park.

Please note that the story outlined in this article is based on personal Disney Cast Member experiences. No two experiences are alike, and this article does not necessarily align with Inside the Magic’s personal views on Walt Disney Company operations.