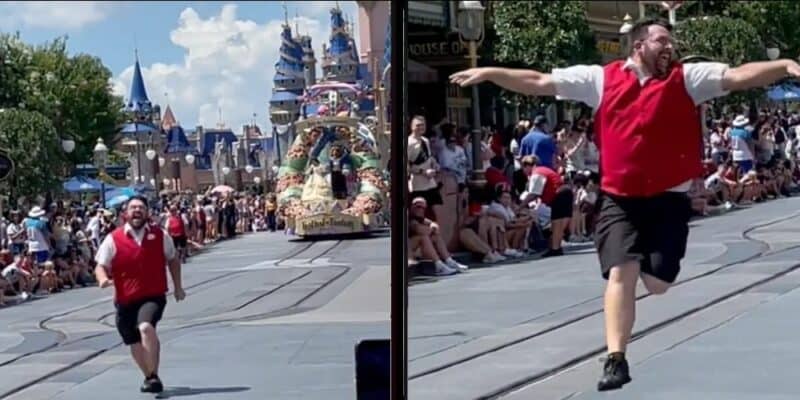 A TikTok video shows Andrew high-fiving the crowd, leaping in the air, and sprinting up and down the iconic street ahead of the Festival of Fantasy Parade:

My favorite cast member of all time!! Andrew!! He was fabulous and getting us pumped up before the Festival of Fantasy parade! #andrew#castmember #festivaloffantasy #parade#dancelikenooneswatching #goandrew

My favorite cast member of all time!! Andrew!! He was fabulous and getting us pumped up before the Festival of Fantasy parade! #andrew#castmember #festivaloffantasy #parade#dancelikenooneswatching #goandrew

The video has 38 complimentary comments so far, with users writing that Cast Members like Andrew are “the magic.”

“We leave in a few weeks and I want to meet him lol,” Madison Elise wrote. One user even suggested that Andrew be given a raise.

Top commenters urged viewers to give him a cast compliment.

“Throughout the 50th Anniversary celebration of Walt Disney World Resort, our cast members continue to be the heart of the magic and go above and beyond to provide magical experiences for the millions of guests who visit. In fact, our cast members have received countless recognition over the years through guest letters, emails, and the thousands of posts we see on social using #CastCompliment, and now, the popular Mobile Cast Compliment feature in the My Disney Experience mobile app is the newest way for guests to compliment cast.

Beginning today, it will be easier than ever to recognize the people who make magic for you during your visit, as you can now compliment individual cast members – by their first name and hometown – as part of new enhancements to Mobile Cast Compliment.”

User @disneydorksduo opted to share their Cast Member compliments via their own appreciation video, urging people to “be nice,”  as seen below:

“Cast members are so special, they make the experience what it is,” user Ariel and Tiffany wrote in the video’s comment section.

In both examples, Guests appear to agree that the Cast Members play a crucial role in the Disney magic that brings tens of thousands of people to the parks daily.

Do you have a favorite Cast Member experience? Tell us about it below!