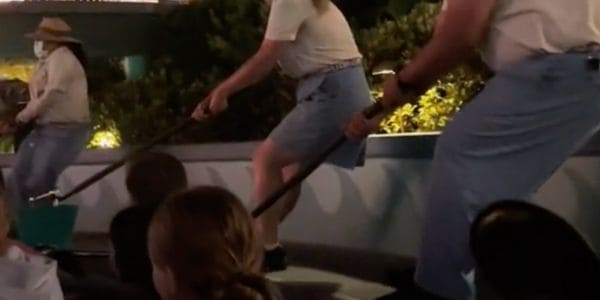 After Guests got stuck on a popular Disney ride, Cast Members ran to their aid and helped pull them out by hand.

At the Disneyland Resort in Anaheim, California, there are many great rides and attractions for Guests to choose from. From newer and more “high-tech” experiences such as Rise of the Resistance in Star Wars: Galaxy’s Edge to more classic and iconic rides like “it’s a small world” and Haunted Mansion, Guests are sure to enjoy themselves in this historic theme park.

One of the most beloved rides has to be “it’s a small world” which can be found in Fantasyland. This ride, while annoying to some, has been the source of magic and happiness for millions of pf Guests since opening in 1966. However, when the ride breaks down, a whole different type of experience unfolds.

A video shared on TikTok recently captured the moments Disneyland Cast Members had to pull out a boat. See the video below posted by @mayakinss_:

I got stuck on its a small world! The tracks got stuck on one side & created a pile up of boats. They had to stop boarding & turned the ride on & off. They manually pulled the boats to get guests off the ride #disney #Itsasmallworld #stuckonaride #disneyland #brokentracks#disneyemployees

I got stuck on its a small world! The tracks got stuck on one side & created a pile up of boats. They had to stop boarding & turned the ride on & off. They manually pulled the boats to get guests off the ride #disney #Itsasmallworld #stuckonaride #disneyland #brokentracks #disneyemployees

As you can see, Guests were stuck on “it’s a small world” and were left helpless as Cast Members rushed to their aid. While breaking down is a somewhat common occurrence at the Disney Parks, when it comes to water rides, the evacuation procedure is quite unique.