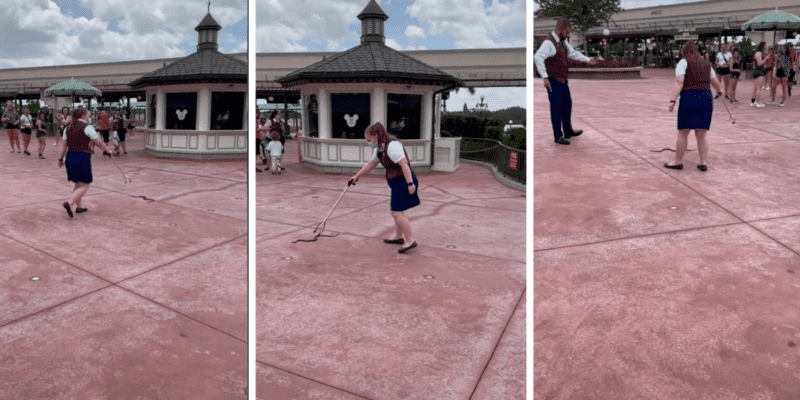 Walt Disney World Resort is known as the “most magical place on earth,” but even Disney World can’t completely control natural occurrences like the weather and wild animals that inhabit the Florida area.

It is no secret that Disney Park Guests and Cast Members alike have reported sightings of both alligators and snakes from time to time at different spots at Walt Disney World, including at Magic Kingdom, EPCOT, Disney’s Animal Kingdom, and Disney’s Hollywood Studios– and not just in the Indiana Jones Epic Stunt Spectacular.

In 2016, a family sued Disney World after a snake allegedly fell from a tree and onto an elderly woman. She suffered a fatal heart attack and the son was bitten. On a more light-hearted note, a wild snake was spotted entering the Gorilla enclosure at Disney’s Animal Kingdom last summer. Just recently, a Disney Cast Member reported spotting a 10-foot snake sneaking through a line of more than 200 Disney Park Guests and no one noticed.

TikTok user @disney_with_bren recently shared a video of a Disney Cast Member wrangling yet another snake in the Park.

As you can see in the video above, the snake is right at the entrance of the Magic Kingdom and a Disney Cast Member is attempting to wrangle it as many Guests watch on.

What do you think of this encounter with a snake at Magic Kingdom? Let us know in the comments!