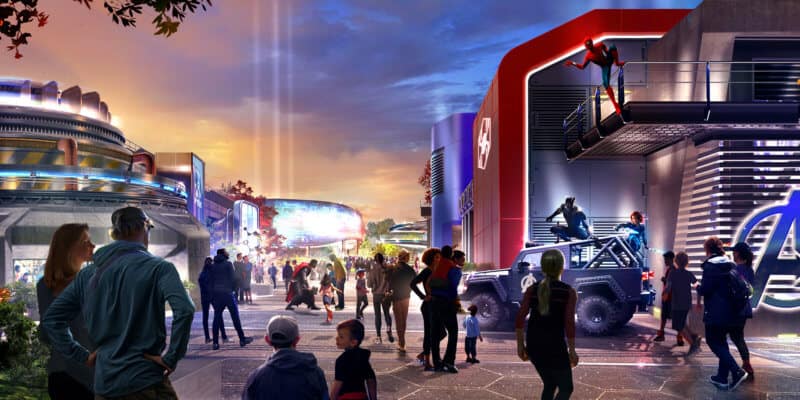 Guests could cause the indefinite closure of this brand-new Disney Parks attraction due to their unruly behavior.

However, there are certain rules and regulations set by Disney that Guests must be aware of during their visit, as breaking them could result in being kicked off property, banned for life, or in some instances, being arrested.

Disney Parks can also take more drastic measures if Guests are constantly caught behaving disruptively. These measures could go anywhere from posting restrictive signs, adding restrictive fences to an area, and sometimes closing an attraction. This last thing could happen to a brand-new attraction if Guests continue to disregard Park rules at Disneyland Paris.

DLP GUESTS SHOW (@dlp_guests_show) recently posted a picture of a family sitting on top of the brand-new sign for the Park’s new land, Avengers Campus, which is not allowed in the Parisian Park.

A little climbing at the Avengers Campus? Yes it will make a nice picture from here…

While this behavior could seem harmless to many, there are several reasons why Guests should never climb the different structures, attractions, and decorations at Disney Parks, including their safety and the structural integrity of the Park and its attractions.

Inside the Magic recently reported on Disneyland Paris having to close an attraction in the same land with restrictive barriers to prevent Guests from climbing it as well, putting themselves in danger of an injury and damaging the new attraction. You can read more about this story here.

Guests must be aware of the different rules and regulations at Disneyland Paris before they arrive at the Park so they can enjoy their visit without facing any unexpected inconveniences. You can click here to learn more about the rules at Disneyland Paris.

The 30th-Anniversary celebrations continue at Disneyland Paris bringing Guests buckets of Disney magic across Disneyland Park, Walt Disney Studios Park, and Disney Village. Guests can enjoy new shows like Disney D-light — the drone pre-show to the Disney Illuminations fireworks — and the character cavalcade Dream… and Shine Brighter! in front of Sleeping Beauty Castle! Mickey and the Magician also made a grand return as part of the Park’s 30th-anniversary celebrations. And with the Halloween season upon us, Disneyland Paris is gearing up for all the frightening fun coming to the Park this year!

What do you think of this incident? Tell us in the comments below!