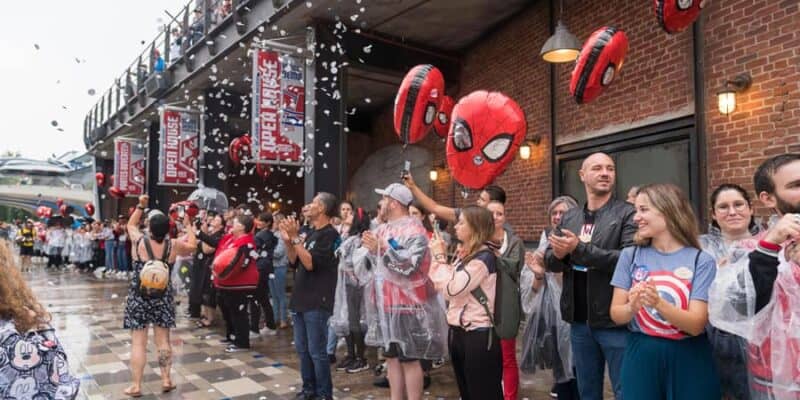 Calling all heroes! Today, July 20, 2020, Disneyland Paris celebrated the official opening of the highly anticipated Avengers Campus. The opening coincides with their 30th Anniversary Celebration, which has offered new shows, festivities, and experiences all year.

With much to celebrate, Cast Members, campus personnel, and special guests sought to welcome in Guests, or the campus’ “first recruits,” in “extraordinary” ways.

Disney Parks Blog shared the details of the “momentous occasion”:

“The long-awaited opening of Avengers Campus, in correlation with the 30th Anniversary celebrations, has action-packed adventures with surprise live-action stunts, heroic encounters with Marvel Super Heroes and two epic attractions. On top of these offerings, recruits can refuel like a Super Hero with all-new dining experiences and look the part with their heroic merchandise.

To commemorate the event, special buttons were distributed along with an exclusive Mission Files document for the Campus’ first recruits.”

And the celebration continued behind the scenes, with special surprises like decorations, desserts, a selfie spot, and more waiting for the Disneyland Paris Cast Members who made the success of this day possible.

Campus personnel shared their experiences with the blog and their feedback was as follows:

“It was such a beautiful and magical day! So intense in emotions!” shared Yodin Luboya, campus personnel.

“It was great to join all of my colleagues to live this moment together and welcome our first recruits!” expressed Carlos Alarcón Álvarez, campus personnel.

As for the recruits who were fortunate enough to experience the campus for its grand opening, they had an action filled day ahead of them “slinging webs like Spider-Man on SPIDER-MAN W.E.B. ADVENTURE; flying into space with Iron Man and Captain Marvel on AVENGERS ASSEMBLE: FLIGHT FORCE; and suiting up and refueling in true Super Hero fashion,” Disney Parks Blog shared.

They also encounter Marvel favorites Spider-Man, Iron Man or Captain Marvel in the new Hero Training Center. Disney Parks documented the experience with a Disney PhotoPass feature that included 27 surrounding cameras, creating a “freeze frame” video for the first time ever in the Disney parks.

Recruits were able to train with the infamous Dora Milaje, Wakanda’s elite royal guard from Marvel’s Black Panther (2018). They also had the opportunity to challenge Guardians of the Galaxy’s Star Lord to an interactive dance-off.

Some Guests took to social media to document the day.

While user @imanou_dlp leapt in the air in front of the Avengers Campus sign in their celebratory post:

@magicdisneygirl posted this 7 minute clip of the days end, featuring a light show that left commenters in awe.

From Disney Park Blog’s perspective and per social media accounts, opening day at Avengers Campus Disneyland Paris appeared to be a success.

For Guests planning a visit to the new Avengers Campus please see the following “practical information” as listed on the Disneyland Paris website:

Recruits will need a valid Walt Disney Studios Park admission (ticket and park registration when applicable) to enter Avengers Campus, no other reservations will be needed, however access to Avengers Campus will be subject to capacity, with potential standby queue area when the Campus reaches capacity

Avengers Campus opening hours will be extended allowing recruits more time inside the land to enjoy the experience.

Were you at the grand opening of Avengers Campus at Disneyland Paris? Share your experience in the comments below!