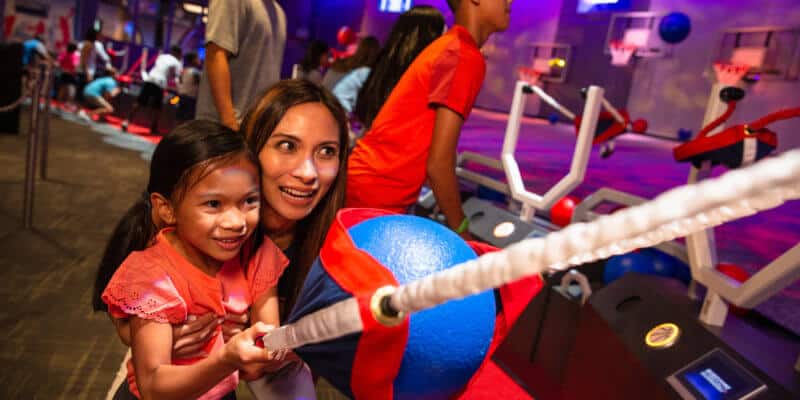 The NBA Experience at Disney Springs opened in August 2019 to much fanfare. The basketball-themed virtual reality experience replaced DisneyQuest, and seemed to be the start of a long-term partnership between Walt Disney World Resort and the NBA.

“NBA Experience lets everybody who loves the game, live it,” Bob said. “We’re excited to open the doors to a fun and unique experience for fans of all ages.”

While the National Basketball Association and Disney maintain a good relationship — the NBA even held its first season amid the pandemic within Disney World’s “NBA bubble” — the NBA Experience was open for less than a year before it closed due to COVID-19 in March 2020, and the decision was ultimately made to not reopen the venue.

From early May 2022 until the end of July 2022, the building that formerly housed the NBA Experience played host to ILMxLab’s “Tales From the Galaxy’s Edge” virtual reality experience based on the video game of the same name.

Star Wars: Tales from the Galaxy’s Edge is an action-adventure experience where you’ll take on the role of a droid repair technician operating near the Outer Rim. When a group of pirates attack you on Batuu, you’ll discover that anyone in the galaxy can become a hero.

Fight alongside classic characters like R2-D2 and C-3PO, and take on unexpected alliances and deadly enemies. Visit Seezelslak in his cantina to pick up missions that will take you into the wilds of Batuu — or become part of his legendary tales.

Now, a new construction permit indicates that Disney may be planning to unveil the permanent replacement for the NBA Experience in the near future. The permit in question is to “Install one (1) post & panel sign on concrete footer in softscape planter.”

While Disney has not officially confirmed that this new signage is for an upcoming permanent offering in the NBA Experience space, the company quickly removed all NBA-related signage ahead of the “Tales From the Galaxy’s Edge” installation.

Now that Star Wars fans have to go back to Batuu at Disney’s Hollywood Studios Park to get their fill of a galaxy far, far away, it is likely that Disney has plans of some sort for the massive space.

Fans have previously speculated that the large structure could be used for escape rooms, but again, Disney has not made any official announcements.

What do you think will replace the NBA Experience at Disney Springs?