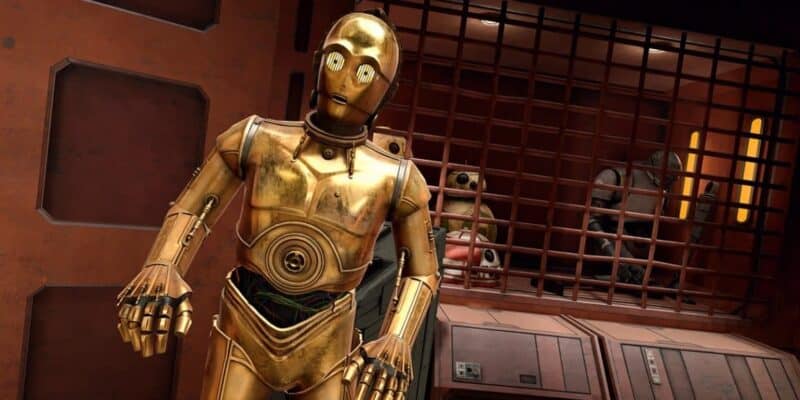 Disneyland Resort — where Guests can find Disneyland Park and Disney California Adventure Park — is also home to the Downtown Disney District. This shopping and dining neighborhood, though smaller in size than Walt Disney World Resort’s Disney Springs, offers many similar experiences, including Starbucks locations and the ever-popular World of Disney store.

Now, though, Disneyland is getting a brand new exclusive Star Wars experience for Guests to enjoy — and the best part? It’s free!

Local Southern California news source, The Orange County Register, provided details about the “Star Wars: Tales from the Galaxy’s Edge” virtual reality experience that will be available at no charge — though reservations may be required based on demand — from November 21, 2021 through January 5, 2022 from 12 p.m. to 8 p.m. daily at the former ESPN Zone location:

Gamers will get a chance to explore Jedi temples and battle a Guavian Death Gang on the outskirts of Black Spire Outpost in a new virtual reality experience in Downtown Disney that expands on the universe created for Star Wars: Galaxy’s Edge at Disneyland.

It has not yet been announced if this experience will become permanent — it is being billed as a “free preview”, per the OC Register’s report. It also remains unknown if Walt Disney World Resort will get a similar experience at any point.

Related: The Cantina Wars: Is a Second Establishment Coming to Rival Oga’s at Disneyland?

Previously, director Jose Perez III sat down with StarWars.com to share details about “Tales From the Galaxy’s Edge: Last Call”, billing it as “Indiana Jones meets Star Wars.” The expansion is described as:

In Last Call, Batuu’s resident grouchy antiquities dealer Dok-Ondar will look to players, once again in the role of a droid-repair technician turned adventurer, to secure some valuable relics; in their adventures, fans will encounter at least two new characters — Lens Kamo and Baron Attsmun — who can be seen in the trailer and key art below. Baron Attsmun, who first appeared in the Canto Bight sequence of Star Wars: The Last Jedi and is voiced by Mark Rolston (The Shawshank Redemption, Rush Hour), is an ultra-wealthy industrialist who sells cybernetic parts throughout the galaxy. Underneath all the glitz, glamor, and a facade of good intentions, however, is something much darker. Lens Kamo, voiced by Karla Crome (Murder: Joint Enterprise, Carnival Row) is the daughter of scholar parents who grew to have a deep interest in history. Now a treasure hunter, her only goal is to keep artifacts out of the wrong hands.

The official description of the original game reads:

Star Wars: Tales from the Galaxy’s Edge is an action-adventure experience where you’ll take on the role of a droid repair technician operating near the Outer Rim. When a group of pirates attack you on Batuu, you’ll discover that anyone in the galaxy can become a hero.

Fight alongside classic characters like R2-D2 and C-3PO, and take on unexpected alliances and deadly enemies. Visit Seezelslak in his cantina to pick up missions that will take you into the wilds of Batuu — or become part of his legendary tales.

Are you going to visit Downtown Disney to take advantage of this exclusive Star Wars experience?