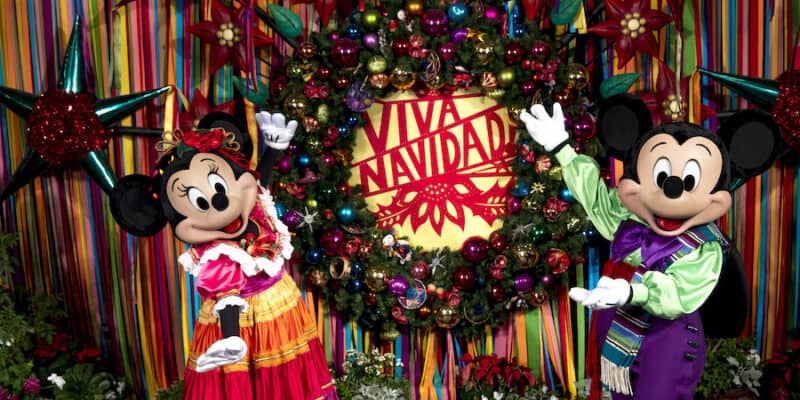 Disney has just announced all of the exciting holiday offerings coming to the Disneyland Resort this holiday season. Confirming that the Festival of Holidays will be returning to Disney California Adventure this year, here are all the details.

Here is what Disney had to say about the return of Festival of the Holidays in 2021:

At Disney California Adventure park, create new memories during Festival of Holidays and discover the sights, sounds and tastes of a diverse season of celebrations during this festive time of year, including Christmas/Navidad, Diwali, Hanukkah, Kwanzaa, and Three Kings Day. Friends and families are invited to celebrate with “Disney ¡Viva Navidad!” as Disney characters host a fun street party featuring Mexican folklórico dancers and Mariachis, Brazilian samba dancers and percussionists, giant mojiganga puppets and Mickey Mouse and Minnie Mouse in their fiesta best! At Paradise Gardens, you’ll enjoy festively themed food and beverages, live music and dance, and later in the holiday season, Mirabel from Walt Disney Animation Studios’ upcoming film “Encanto” will make her park debut. Stay tuned to the Disney Parks Blog for information on Mirabel’s arrival!

We recently reported that Mirabel from Disney’s upcoming film, Encanto would be coming to the Disneyland Resort and now we can confirm that she will make her debut during the Festival of Holidays. How exciting to have a new character come to the Park for the holidays.

What is the Festival of the Holidays? This is a special event combining food and entertainment at Disney California Adventure that brings the magic of the holiday season into the park!

Disney also announced that alongside the Festival of the Holidays, the Holiday Magic fireworks would be returning to Disneyland! We also have the dates that the Disneyland Resort will be celebrating the holiday season this year, you can read those here.

Christmas is also coming to Walt Disney World this year, but the experience will be modified. You can read more about that here.

Let us know if you are excited to experience Festival of the Holidays this year at Disney Calfornia Adventure in the comments!

Want to book a holiday vacation to the Disneyland Resort? We can help, click here for more information.

Comments Off on Festival of Holidays Is Returning to California Adventure!