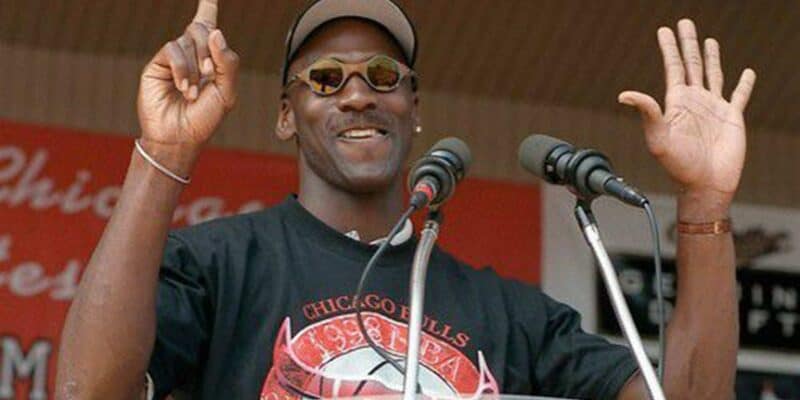 If you’re visiting any of the Disney Parks and Resorts, you know that there’s a pretty good chance you may spot someone famous.

It’s no secret that celebrities love hanging out at all of the Disney Parks, including Disneyland, Walt Disney World, and the international al Disney Resorts. We constantly spot famous actors and athletes visiting Disney, and there’s always a huge buzz whenever Kim Kardashian, Kanye West, or Marvel star Chris Evans is seen spending the day with Mickey Mouse. We even reported don a Guest seeing the CEO of the Walt Disney Company, Bob Chapek himself!

Recently, one Guest spotted NBA icon Michael Jordan, though the word “icon” may not do the former athlete justice. See the picture they took of Jordan and one of his security guards below courtesy of Kris Corr:

Ran into Michael Jordan yesterday at Hollywood Studios!!! As you can see, his security was pretty upset about me noticing him. Lol. (Even tho I didn’t approach him or speak to him) The 90’s basketball fan in me was DYING tho!!!!!!

Related: Disney Guests Say It Is “Just Too Stressful” and “Magic Is Gone”

Michael Jordan is an American businessman and former professional basketball player who played for both the Chicago Bulls and Washington Wizards. His biography on the official National Basketball Association website states: “By acclamation, Michael Jordan is the greatest basketball player of all time”, which is not an understatement. Jordan is an all-time career leader for points averaged in the NBA Playoffs with an average of 33.5 ppg., ranking second for points scored in the playoffs with 5,987 points. Played and started in 179 career NBA playoffs games, compiled a 119-60 record, 5,987 points (33.5 ppg.), 1,152 rebounds (6.4 rpg.), 1,022 assists (5.7 apg.)

As stated earlier, celebrities love visiting all of the Disney Parks and Resorts with people like Kourtney Kardashian and Kylie Jenner completely closing down rides. Although they may get special privileges, the way celebrities are treated in the Parks may surprise you.

Disney’s Club 33, one of the most infamous and exclusive clubs, is a hot spot for celebrities and big Disney fans alike, offering world-class dining and entertainment experiences. Get your wallet ready though, the initial fee to join the club is $33,000, and members will pay $15,000 annually to keep their membership! Find out more about Disney’s Club 33 here.

Have you ever spotted a celebrity at the Disney Parks? Let us know in the comments below!