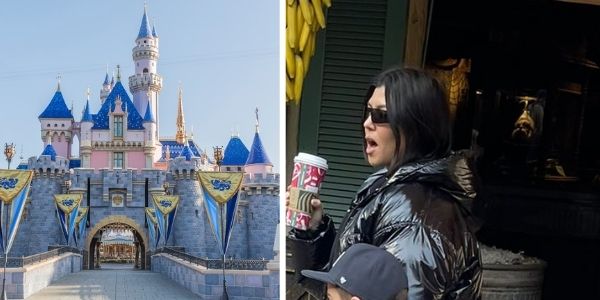 Even celebrities can’t resist visiting the Happiest Place on Earth

Although the Disney Parks and Resorts across the world are made for everyone to enjoy, celebrities just can’t seem to get enough of that Disney magic. From Marvel’s Chris Evans (Captain America), and Kylie Jenner (Keeping Up With The Kardashians), as well as rap icons like Travis Scott and Kanye West, all kinds of stars are spotted at Disney every year. And speaking of the Kardashians, Kourtney, the oldest of the three Kardashian sisters was recently seen taking a family trip to Disneyland with fiance Travis Barker.

Social media was lit ablaze recently when Guests started realizing one of the Kardashians was visiting Disneyland, hopping aboard rides and all. Kourtney and her Fiance Travis Barker, lead drummer for the Band Blink-182 was captured in several TikToks roaming around Disneyland. Jose Estrada (@poet818) posted a video showing the couple heading into one of the Adventureland restaurants with their kids:

not my friend fan girling

Another TikTok was posted by jenn.euros (@jenn.euros) showing the family entering the queue for the Indiana Jones Adventure, claiming Disneyland had shut the ride down for them.

Kourtney Kardashian at Disneyland today! Got the entire ride shut down

Kourtney Kardashian at Disneyland today! Got the entire ride shut down kardashian

This is not even the first time Kourtney Kardashian and Travis Barker have been spotted at Disneyland this year, with the couple posting photos of their trip back in October earlier this year.

Have you ever spotted a celebrity at Disneyland or Walt Disney World? Who did you get to meet?