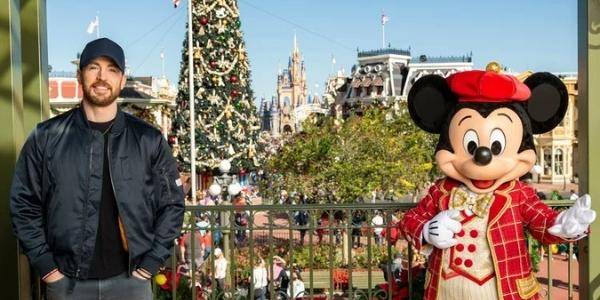 TikTok user @disneyista recently recorded Chris Evans inside Magic Kingdom Park before its official opening for the day, further showcasing all the perks that come from being a celebrity in Disney. Evans, a huge Disney fan himself, can be seen spending a little bit of his Thanksgiving Holiday break messing around with fans, Cast Members, and even Mickey Mouse on top of Main Street, U.S.A.‘s still-closed Walt Disney World Railroad Station.

Evans can be seen getting into the holiday spirit with Mickey as well as waving to all of his adoring fans while they wait to enter the Park. Disney’s official TikTok account responded to the original TikTok commenting:

“Screaming. Crying. How does it feel to live our dream?!?”

According to an official press release from Disney, Evans recently visited the Walt Disney World Resort with friends and family in order to celebrate the holidays, just in time to enjoy all of the 50th-anniversary celebrations.

This is not the first time Evans has visited Walt Disney World and will certainly not be the last, with his love for the parks and resorts spanning many years. He even recently stated his favorite ride at Magic Kingdom was Space Mountain.

Walt Disney World is not just the premier vacation hotspot for the average family; celebrities also get a craving for an ice-cold Mickey bar or force themselves to ride Expedition Everest until their head hurts. Seeing celebrities is just another benefit of being a Cast Member at the Disney Parks.

Have you ever seen a celebrity at a Disney Park or Resort? How was that experience?